3.22.21 The energy complex has pushed higher this morning after trading both sides of even earlier in the session

Outlook: The energy complex has pushed higher this morning after trading both sides of even earlier in the session. Providing a layer of support is the news that the AstraZeneca vaccine has been found to be 79% effective in preventing symptomatic illness. The findings of a large U.S. trial have also shown that the vaccine is 100% effective against severe disease and hospitalization as well. The results were based on 32,449 participants across 88 trial centers in the U.S., Peru, and Chile. Participants who received the vaccine in the trial had no increased risk of blood clots or related illnesses. AstraZeneca is preparing to submit the vaccine to the U.S. Food and Drug Administration for an emergency use authorization. The FDA has stated previously that they are willing to grant an authorization for any vaccine that has been proven to be safe and is at least 50% effective, signaling that the two-dose AstraZeneca shot is likely to be added to the current arsenal of vaccines in the coming weeks. Despite the potential for another vaccine option here in the U.S., lockdowns in Europe are continuing to weigh on the demand recovery outlook. Parts of the continent are entering a “third wave” of the virus, and are having to go back into lockdown in order to slow the spread. France, Poland, and Ukraine all implemented stricter measures over the weekend. Equities are pushing higher this morning as well, as all three major averages are trading well above even.

On Friday the U.S. topped 100 million Covid-19 vaccine doses administered, according to data from the CDC. Around 35 million people have been fully vaccinated, which is about 13.5% of the adult U.S. population. The Biden administration is pushing for 200 million doses by the 100th day in office. The U.S. is administering about 2.5 million doses each day. 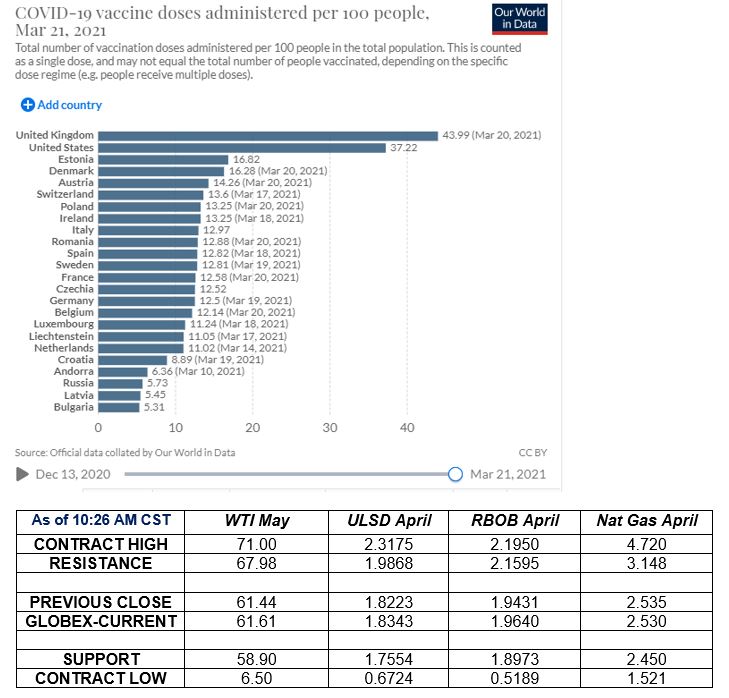