3.22.21 The energy complex has shifted dramatically lower this morning, as May crude has fallen around 4%

Outlook: The energy complex has shifted dramatically lower this morning, as May crude has fallen around 4%. Product markets have fallen a similar amount, with April RBOB down about 4.5 cents, and nearby ULSD down about 5 cents. Refreshed lockdown measures in parts of Europe, along with a troublesome rollout of Covid-19 vaccines have pressured the complex lower. Analysts at Commerzbank have stated that the limited mobility due to the extended lockdowns is likely going to have a correspondingly negative impact on oil demand. Germany is reportedly extending its lockdown until April 18, while nearly 21 million people in 16 areas of France have been placed under lockdown as of last week Friday. A report from the Data Safety Monitoring Board stated that AstraZeneca may have included outdated information in trial results of its Covid-19 vaccine. The report comes just one day after results from a large U.S. trial showed that the vaccine was safe and highly effective. Trial results showed that the AstraZeneca vaccine was 79% effective. The new report may cast doubt on whether the vaccine will be given an emergency use authorization by the U.S. Food and Drug Administration. AstraZeneca plans to prepare for the primary analysis to be submitted to the FDA by mid-April. Equities are having a back and forth session, as all three major averages have traded both sides of even.

On March 23, 2020 the S&P 500 hit its lowest level after the Covid-19 pandemic pushed the index 30% lower in 22 days. There have been five other sell-offs of 30% or more since World War II. After such a sell-off, the market responds in year two with around a 17% return on average. 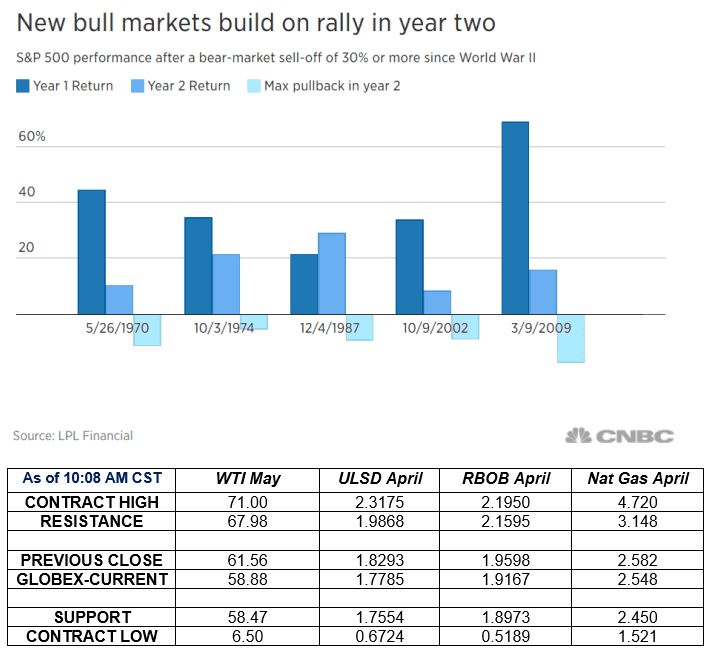