3.25.21 The energy complex has experienced another wild swing this morning, as crude and products are trading well below even

Outlook: The energy complex has experienced another wild swing this morning, as crude and products are trading well below even. May crude is back down over $3 per barrel, while nearby RBOB and ULSD have fallen about 6.75 cents and 8 cents on the day, respectively. Demand concerns due to lockdowns in Europe continue to put pressure on the complex, as parts of the continent have reimposed lockdown measures intended to slow the spread of Covid-19. Next week OPEC+ members will meet for 2 days of meetings. Given the volatility in the market, and considering comments made by the Saudi Energy Minister in the prior meeting, it seems unlikely that the broader group will push for increased production. Saudi Arabia is also likely to continue its voluntary 1.0 million bpd production cut, which they extended for an additional month in the previous meeting. The cautious approach being taken by OPEC+ will likely provide some stability to the market. The Biden administration is planning to announce a new Covid-19 vaccine goal, with the expectation being 200 million doses in the first 100 days of the administration. The previous goal of 100 million doses was hit last week Friday, 42 days ahead of schedule. The U.S. is averaging about 2.5 million vaccinations each day, according to the most recent data from the CDC. Equities are having a rough start to the day despite a better-than-expected report from the U.S. Department of Labor. All three major equity averages are trading well below even. Weakness in the sector is stemming from comments made by Fed Chairman Jerome Powell. He stated that the recovery in the economy has been “substantial” and that the central bank at some point will roll back some of the measures it implemented during the pandemic. 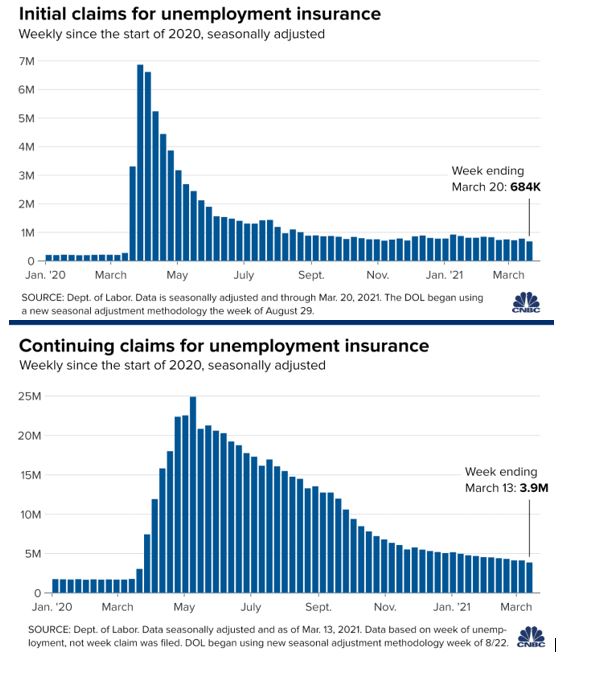