3.26.21 The energy complex has recaptured much of the losses experienced yesterday, as May crude is up about 4% on the day

Outlook: The energy complex has recaptured much of the losses experienced yesterday, as May crude is up about 4% on the day. Product markets are experiencing similar gains, with April RBOB up about 5 cents, and April ULSD up around 6 cents. Adding support to the complex is the news that the tanker that is blocking the Suez Canal may take weeks to clear. Officials have stopped all ships from entering the canal as of yesterday. The canal is used by refiners in the U.S. and Europe and is considered to be one of the busiest waterways in the world. Around 52 vessels pass through the canal each day on average. The waterway connects the Mediterranea Sea to the Red Sea through the Isthmus of Suez. Next week members of OPEC+ will meet virtually, where it is anticipated that the current production quotas will be maintained for an additional month. It is also expected that Saudi Arabia will roll the 1.0 million bpd production cut into May. Caution from the group is likely to be exercised due to the recent volatility, as well as the continued lockdowns in Europe which are likely to pressure demand for energy products lower. Equities have jumped higher this morning, as all three major averages are trading well above even. A University of Michigan survey released today showed the final reading of the index of consumer sentiment was 84.9 in March, up from 76.8 in February. Economists polled by Dow Jones anticipated a reading of 83.7.

While the U.S. continues to vaccinate around 2.5 million people each day, health experts have stated that wide-scale testing is a necessary part of getting life back to normal. The U.S. appears to be going in the opposite direction on testing however, as the number of daily tests has declined 35 percent since early January. The U.S. is recording around 58,000 new Covid-19 cases each day based on the seven-day average, according to data from Johns Hopkins University, which is about a 7% rise from the week prior. 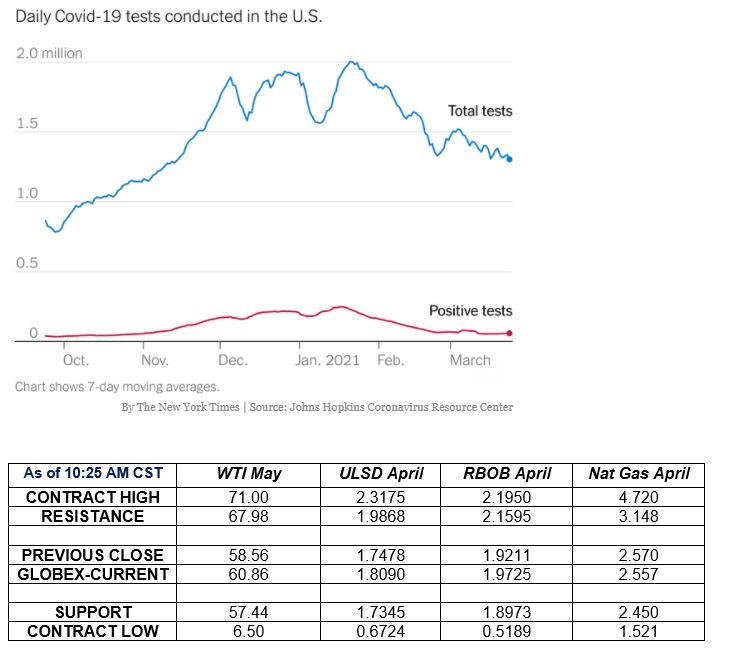