3.29.21 The energy complex has been mixed and choppy this morning as crude and products have traded both sides of even

Outlook: The energy complex has been mixed and choppy this morning as crude and products have traded both sides of even. Pressuring the complex is the news that the Ever Given, the large shipping container that had been blocking traffic in the Suez Canal, has been refloated. Traffic in the waterway has resumed as the vessel has been repositioned into the middle of the canal. The blockage had been providing a layer of support to the complex, as the waterway is used to ship crude from OPEC producers to the U.S. and Europe. Later this week OPEC+ will hold meetings to discuss compliance as well as market fundamentals. Due to the recent volatility and the continued lockdowns in Europe, the group is expected to hold production relatively steady. According to a Reuters report, Russia would support keeping output stable in May. Russia is likely to push for a small increase in its quota to meet rising seasonal demand, however. Saudi Arabia is likely to continue its voluntary 1.0 million bpd output cut for an additional month as well. Market participants will be keeping a keen eye on any developments from the group. Equities are having a rocky start to today’s session, as all three major averages are trading well below even.

Roughly 28% of the U.S. population has received at least one dose of a Covid-19 vaccine, and about 15.5% have been fully vaccinated, according to the most recent data from the CDC. According to a report from CNBC, when Israel hit around 25% of its population being vaccinated, case counts started to decline. Cases here in the U.S., based on the seven-day moving average, have increased 16% when compared to the week prior. Despite the recent rise, cases are down over 70% when compared to early January. 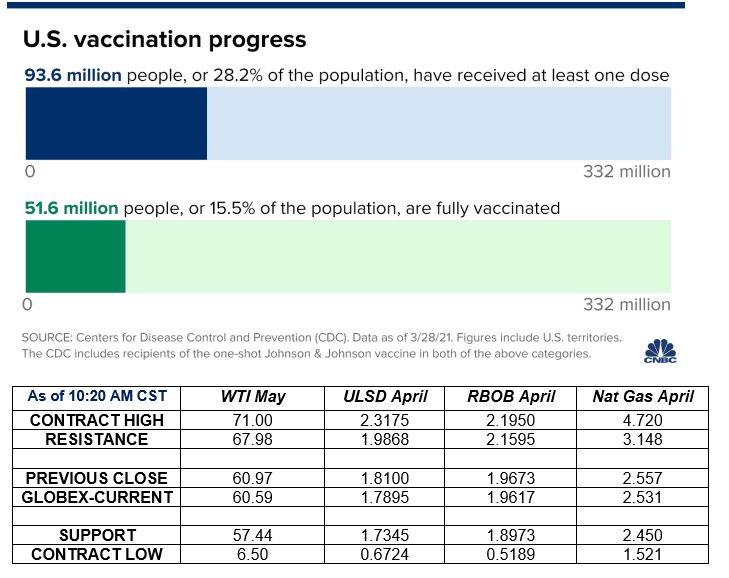 Energy markets will be closed on Friday, April 2 due to the Good Friday holiday. CHS Energy Hedging will not be staffed on Friday.