3.30.21 Energy markets have shifted slightly lower this morning as weak demand in Europe and the re-opening of the Suez Canal weigh on the complex

Outlook: Energy markets have shifted slightly lower this morning as weak demand in Europe and the re-opening of the Suez Canal weigh on the complex. Germany, which is the largest oil consumer in Europe, has extended its lockdown until April 18. Lockdowns in France, Austria, Norway, and Switzerland have also been announced. According to a report from Rystad Energy, the renewed lockdowns and poor vaccine rollouts in the region could prevent the recovery of up to 1 million bpd of oil demand this year. Yesterday the Ever Given, the large container ship that was blocking the Suez Canal, was refloated, which has allowed ship traffic to resume. The waterway is used by oil producers in Asia to ship crude to refineries in the U.S. and Europe. Preventing a steeper sell-off is the expectation that OPEC+ will decide to hold production steady in May. The group meets this week, where it is widely anticipated that Saudi Arabia will continue its voluntary 1.0 million bpd output cut, while production from the broader group will remain relatively flat. Earlier this morning it was reported that the Saudi’s are preparing to extend their output cut into June. Equities are having another tough session as the 10-year Treasury yield hit a 14 month high earlier in the session. The benchmark 10-year Treasury yield has been pressured higher, as tomorrow it is expected that President Biden will announce a massive infrastructure bill.

The 10-year Treasury yield hit as high as 1.776% earlier in the session, which is a 14-month high. A massive infrastructure bill that is expected to be announced on Wednesday has boosted expectations of a broad economic recovery. Along with that economic recovery are the expectations that inflation will rise. The legislation is likely to have a price tag of at least $3 trillion. 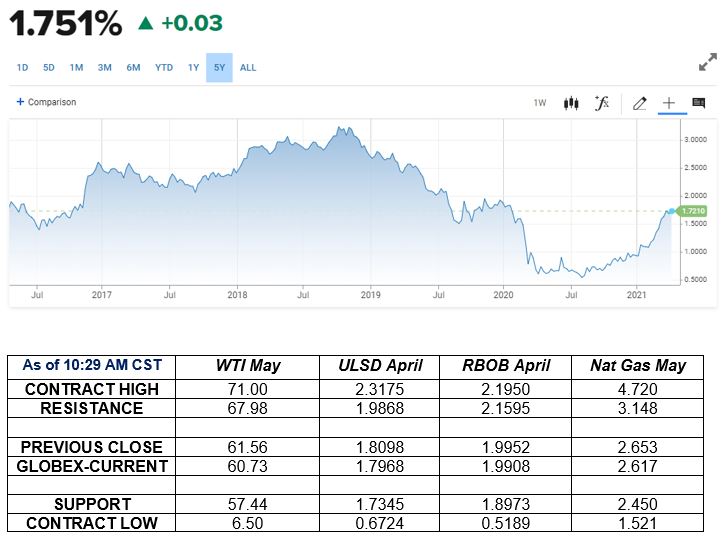 Energy markets will be closed on Friday, April 2 due to the holiday. CHS Energy Hedging will not be staffed on Friday.