4.5.21 The energy complex has started the week lower with the benchmark WTI contract falling below 60 this morning.

Outlook: The energy complex has started the week lower with the benchmark WTI contract falling below $60 this morning. Weakness stems from the OPEC+ decision announced last Thursday that the group would begin to ease output cuts in May. Production cuts will reportedly be eased by 350,000 bpd in May, 350,000 bpd in June, and a further 400,000 bpd in July. A conversation between the Biden Administration and Saudi Arabia had supposedly helped spur this decision as the U.S. administration had requested that energy prices be kept affordable. Saudi Arabia will also be phasing out its own voluntary cuts by July, which will add an extra 1 million bpd to the market. Increased Iranian production being exported to China has also caused weakness in prices after March exports were seen near 1 million bpd. In more supportive news, equities are starting the week higher due to positive macros. On Friday the Labor Department reported that nonfarm payrolls increased by 916,000 in March. Analysts had expected an increase of just 675,000. Payrolls are now seen at their highest level since August and the unemployment rate has fallen to 6%. Traders view this as a strong sign of economic recovery as we see a strong pace for vaccines and the continued lifting of restrictions. Europe on the other hand remains under lockdown as variants continue to pose a threat and vaccine progress lulls. Japan also plans to expand its emergency measures in order to curb the spread of the virus as virus mutations are seen spreading. Overall covid-19 related headlines will remain in the spotlight as traders try and gauge demand recovery as additional production is now expected in the market.

The EIA reported in its Monthly Energy Review that U.S. energy consumption fell by 7% in 2020 compared to 2019. 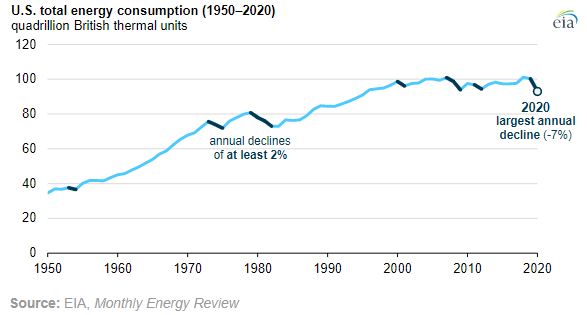