4.6.21 Strong economic data from the U.S. and China has helped push energy futures higher this morning

Outlook: Strong economic data from the U.S. and China has helped push energy futures higher this morning. According to the Institute for Supply Management, U.S. services activity hit a record high in March. The ISM’s non-manufacturing activity index rose to 63.7 last month, which was the highest in the survey’s history. Last week they also reported that the U.S. economy added 916,000 jobs last month, which is the most since August 2020. U.S. economic growth is expected to be the best it has been in nearly four decades, according to Reuters. China’s service-sector gauge has also hit a 3-month high. The Caixin China Services purchasing managers index rose to 54.3 in March. A measure of 50 or greater represents an expanding sector, while a measure below 50 represents a contraction. Adding an additional layer of support this morning is the news that the U.K. is expected to ease more coronavirus restrictions on April 12. With the most recent OPEC+ meeting setting the stage for increased production and the group easing output quotas, focus will now likely shift to negotiations between the U.S. and Iran. The two countries are expected to begin indirect discussions, as the five nations that remain in the 2015 nuclear agreement are meeting in Vienna this week. It is considered unlikely that Iran will re-enter the nuclear accord this year however. Equities are having a mixed session thus far, as the DJIA has traded both sides of even while the Nasdaq Composite and the S&P 500 have held onto moderate gains. 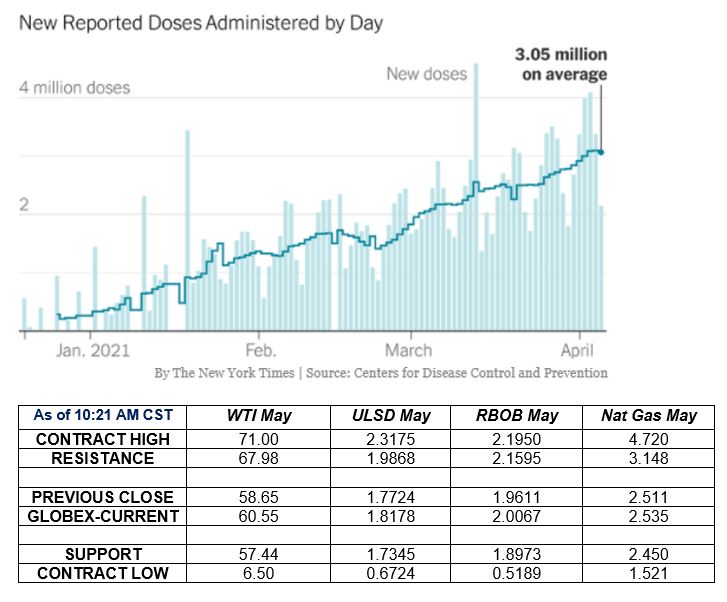