4.7.21 The energy complex has been mixed and choppy ahead of the Weekly Petroleum Status Report set to be released this morning

Outlook: The energy complex has been mixed and choppy ahead of the Weekly Petroleum Status Report set to be released this morning. Yesterday afternoon an industry group reported that refined product inventories rose dramatically, which is weighing on the complex. Strong economic data from the U.S. and China has helped bring a layer of support to the market, however. Yesterday the International Monetary Fund stated that the unprecedented response from governments around the world to help combat the pandemic would help push global growth to 6% this year, which would be the highest level in about 40 years. Yesterday Iran and members of the 2015 nuclear accord held what was described as “constructive” discussions. The U.S. and Iran are attempting to revive the accord, which would allow Iran to increase crude oil production. Iranian crude is currently exempt from the OPEC+ agreement. Iran has the capacity to produce about 4 million bpd, but currently only produces about 2.35 million bpd. Equity markets are holding onto small gains this morning, with the S&P hovering near an all-time high. Investors are awaiting details from the Federal Reserve’s last policy meeting to be released, which is scheduled to happen later this morning. 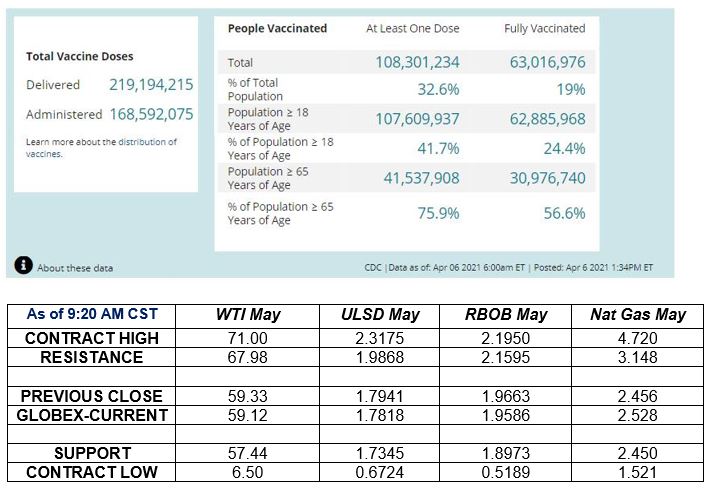