4.9.21 The energy complex has been mixed this morning as crude and products have traded both sides of even

Outlook: The energy complex has been mixed this morning as crude and products have traded both sides of even. Concerns over the AstraZeneca vaccine and lockdowns in Europe have pressured the complex. Discussions between the U.S. and Iran are also adding in a layer of downside risk. Delegates from the countries in the 2015 nuclear accord are holding discussions this week in Vienna. The negotiations aim to restore the restrictions on Iran’s nuclear activities in exchange for the lifting of U.S. sanctions. According to a Reuters report, the discussions are progressing, but Iranian officials have indicated that disagreements with the U.S. over which sanctions must be lifted still exist. It is unlikely a deal will be reached quickly. Due to the sanctions, Iran is producing about 2.35 million bpd of crude oil. They have the capacity to produce about 4 million bpd. Market participants will be keeping an eye on these negotiations, as Iranian crude production is currently exempt from the OPEC+ agreement. President Biden is scheduled to meet with a bipartisan group of U.S. lawmakers on Monday to discuss the $2.25 trillion infrastructure bill. The Senate parliamentarian stated recently that Democrats in the House and Senate could pass another bill via the budget reconciliation process this fiscal year. President Biden has signaled a willingness to negotiate aspects of the bill, but it's likely if a bill were to pass it would be done so with a simple majority. Equities are having a bit of a mixed session, with the DJIA and S&P 500 trading just above even, while the Nasdaq Composite has traded both sides. The S&P 500 is hovering near its all-time high and is poised to close the week up about 2%.

More than 66 million people in the U.S. have been fully vaccinated against Covid-19. That represents nearly 20% of the population. According to the most recent CDC data, 112 million people have received at least one dose. The number of doses administered each day is also continuing to steadily rise, with a reported 3.4 million shots given on Thursday. The seven-day average of inoculations sits around 3 million per day, which would signal the Biden Administration will hit its goal of 200 million doses within the first 100 days in office. 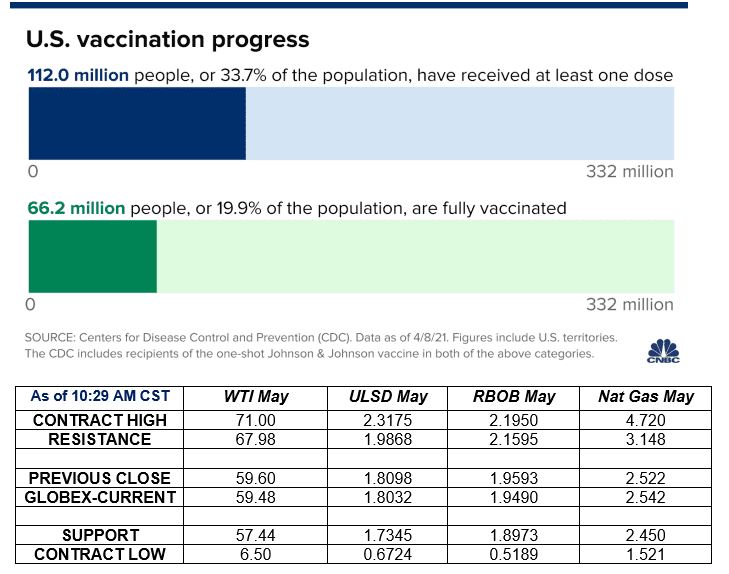