4.12.21 The energy complex has moved higher this morning as crude and products are all trading above even

Outlook: The energy complex has moved higher this morning as crude and products are all trading above even. Prices have found some support this morning after Yemen’s Houthis announced that they had fired 17 drones and two ballistic missiles at targets in Saudi Arabia. The targets were reportedly Saudi Aramco refineries in Jubail and Jeddah. There has been no confirmation from the Saudi’s however. Adding another layer of support to the complex this morning is a statement from Federal Reserve Chairman Jerome Powell. He stated that the central bank remains committed to keeping a loose monetary policy in place and that its “highly unlikely” rates would be raised in 2021. President Biden is scheduled to meet with a group of bipartisan lawmakers today, in what will be an attempt to get both parties on board with his $2.25 trillion infrastructure bill. The lawmakers chosen for the first meeting have a history of working on committees that oversaw infrastructure investments. Funding for the massive bill comes from an increase in the corporate tax rate, which has experienced resistance from both sides thus far. The Senate parliamentarian stated recently that Democrats in the House and Senate could pass another bill via the budget reconciliation process. If a 60 vote majority cannot be reached, it is likely some version of the infrastructure bill will make it through both chambers of Congress with a simple majority. Equities are off to a rocky start, as all three major averages are currently trading below even.

The U.S. reported a single-day record of 4.6 million vaccine doses administered on Saturday, according to the most recent CDC data. The seven-day average number of inoculations has risen to 3.1 million per day. About 36% of the U.S. population has received at least one dose of a Covid-19 vaccine, and about 20% are fully vaccinated. 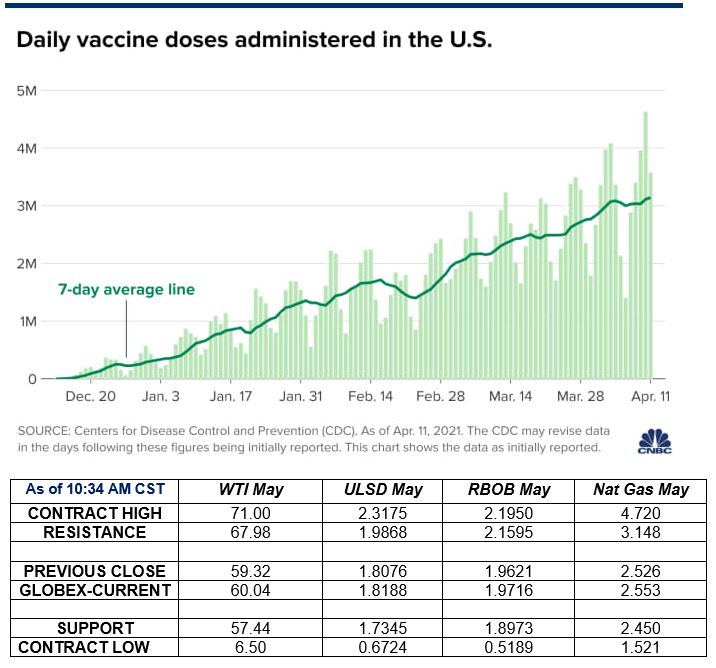