4.13.21 The energy complex has pushed higher this morning after strong economic data from China was reported

Outlook: The energy complex has pushed higher this morning after strong economic data from China was reported. China’s exports rose sharply in March, while imports reached the highest level in four years. Exports soared 30.6% in March when compared to the same period in 2020. Analysts polled by Reuters anticipated a 35.5% jump in exports. Crude oil imports rose 21% in March as well. The data suggests that China’s economy is gaining momentum as it rebounds from the pandemic. Adding a layer of uncertainty to the market this morning comes from the announcement that the U.S. will pause the use of the Johnson & Johnson vaccine. The FDA is asking states to temporarily halt using the J&J vaccine after six people in the U.S. developed a rare blood-clotting disorder, according to a report from CNBC. The halt in the use of the vaccine is out of an abundance of caution, according to the FDA. The CDC and the FDA are holding a press conference this morning to discuss the announcement. Equities have started the day mixed, with the DJIA and the S&P 500 hovering somewhat near even, while the Nasdaq Composite has pushed nearly 1% higher.

According to the most recent CDC data, the seven-day average number of covid-19 inoculations in the U.S. rose to a record high 3.2 million per day on Monday. Over 20% of the population, or about 74 million people, have been fully vaccinated as well. Despite the vaccination progress, case counts have risen in 27 states, with Michigan leading the way. The seven-day average number of cases has risen 7% when compared to last week. 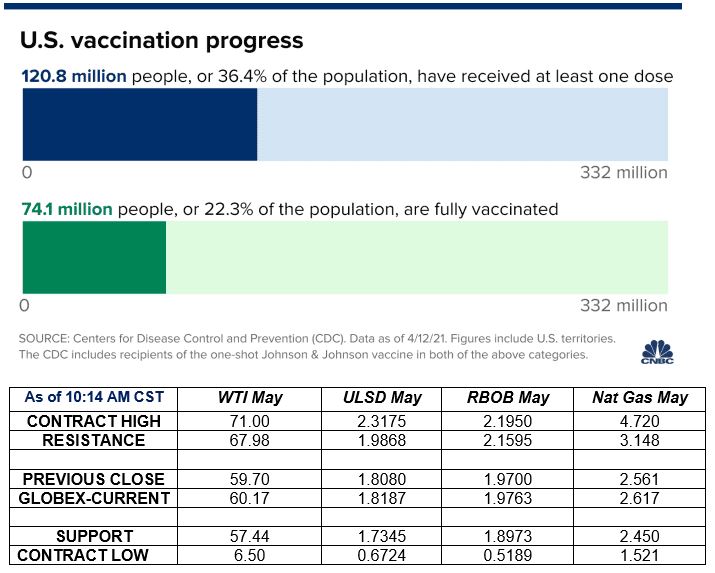