4.14.21 The energy complex has continued to push higher despite rising Covid-19 cases

Outlook: The energy complex has continued to push higher despite rising Covid-19 cases. Case counts here in the U.S. have continued to rise in recent weeks, with the seven-day average number of cases increasing by 10% when compared to the week prior, according to data from Johns Hopkins University. Adding some downside pressure comes from the announcement that the U.S. has suspended the Johnson & Johnson vaccine due to a rare blood clotting issue. Despite the setback, U.S. health officials have stated that the FDA’s recommended pause of the J&J vaccine will not slow down the vaccination campaign. Pfizer CEO Albert Bourla said yesterday that the company has increased production of its two-shot vaccine and will be able to deliver 10% more doses to the U.S. by the end of May than it had previously agreed to. The 10% increase will push total doses up to 220 million from Pfizer. This morning the International Energy Agency stated that vaccine rollouts are brightening the outlook for global oil demand. They also stated that fundamentals look “decidedly stronger” according to a report from Reuters. The IEA is predicting a significant rise in global oil demand in the second half of the year, which will in turn pressure inventories lower. The IEA expects crude oil producers to have to pump an additional 2 million bpd in the second half of the year in order to keep up with demand. Equity markets are having a mixed session thus far. The DJIA and the S&P 500 have held onto moderate gains, while the Nasdaq Composite has traded both sides of even. 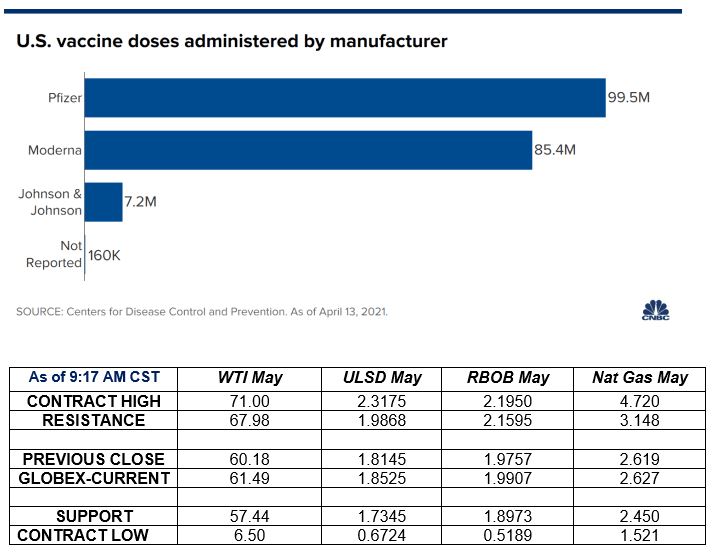