4.15.21 The energy complex has taken a bit of a breather this morning as crude and products are trading near even

Outlook: The energy complex has taken a bit of a breather this morning as crude and products are trading near even. Strong retail sales data for the month of March is providing some support to the complex. According to the Department of Commerce, U.S. retail sales jumped 9.8% higher in March, largely due to the $1.9 trillion stimulus bill and $1,400 direct payments being sent out. Economists had been anticipating a gain of 6.1%. The bar and restaurant sector saw increases of 13.4% compared to the month prior. Positive jobs data reported by the U.S. Department of Labor has also helped provide a layer of support this morning. Rising Covid-19 cases are adding a bit of downside pressure however, as the U.S. is reporting about 71,000 daily new cases. The seven-day average number of cases has risen by about 10% when compared to the week prior, according to the CDC and data from Johns Hopkins University. The CDC is also reporting that the U.S. is averaging 3.3 million daily inoculations. The daily average number of vaccines administered has now been over 3 million for 8 straight days. About 23% of the U.S. population is fully vaccinated, while over 37% have received at least one dose. At this current pace, the Biden Administration’s goal of 200 million doses by 100 days in office will be achieved earlier than expected. Equities have leaped higher this morning after strong earnings were reported from several large companies. The DJIA and the S&P 500 are both at intraday all-time highs, while the Nasdaq Composite has pushed about 1.5% higher as well. 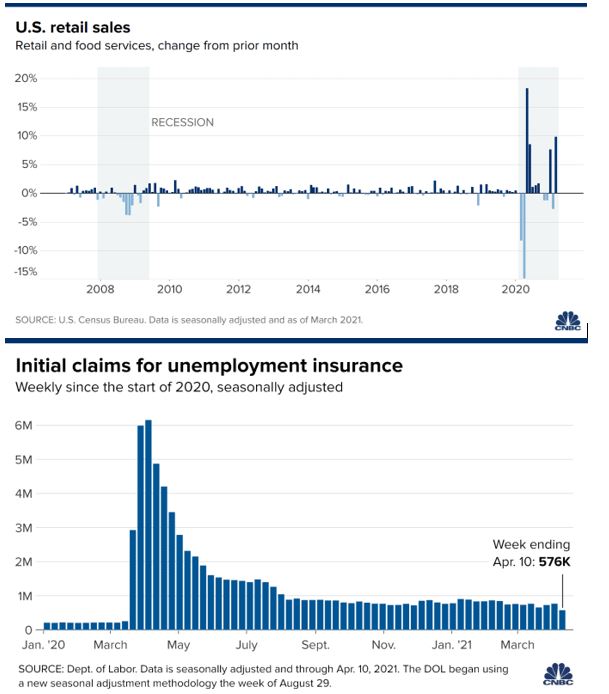