4.16.21 The energy complex has taken a bit of a step back this morning as crude and products are trading below even

Outlook: The energy complex has taken a bit of a step back this morning as crude and products are trading below even. Crude prices are on track for a nearly 6% gain this week however, as an improved oil demand outlook has helped boost futures prices. Strong economic data from China and the U.S. have also helped buoy prices this week. Yesterday the U.S. Department of Commerce reported a significant jump in U.S. retail sales, rising nearly 10% for the month of March. Economists anticipated a 6.1% increase. Yesterday the U.S. Department of Labor released a much better than expected weekly jobless claims report, with new claims totaling 576,000 for the week ending April 10. Economists polled by Dow Jones expected 710,000 new claims. Vaccine progress in the U.S. has also added in a layer of support, as the pause in Johnson & Johnson inoculations has not slowed the average number of shots being given. Pfizer has recently ramped up production and can deliver 10% more doses to the U.S. than previously expected. Equities are having a somewhat mixed session, as the DJIA and the S&P 500 are trading in positive territory, while the Nasdaq Composite has traded both sides of even. The DJIA pushed over the 34,000 point threshold for the first time ever this morning. The S&P 500 has also hit an intraday all-time high. Stronger than expected earnings from U.S. banks have helped elevate equities this morning.

The CDC reported that 3.53 million vaccine doses were administered on Thursday. That brings the seven-day average of daily U.S. vaccinations up to 3.3 million. As of yesterday, about 198 million total doses have been administered. The Biden administration’s goal of 200 million doses by the first 100 days in office will likely be achieved today. 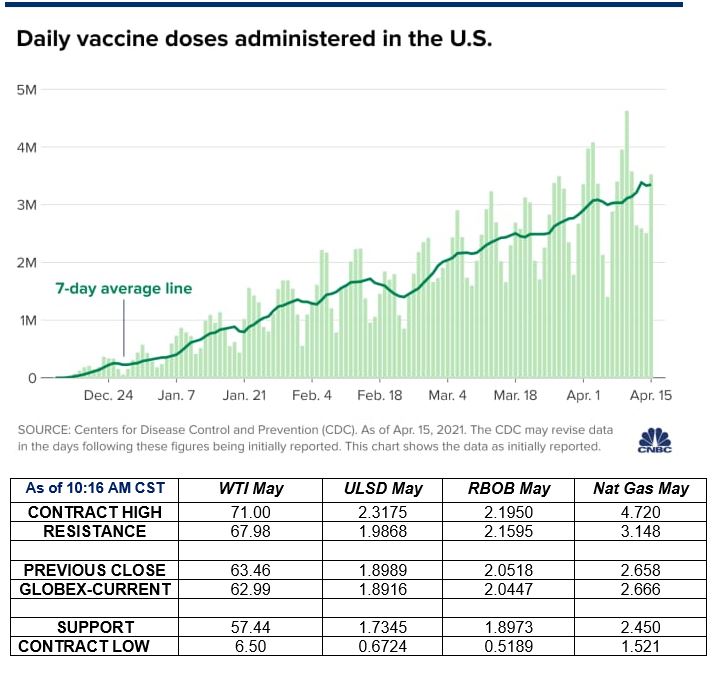