4.20.21 The energy complex has taken a dramatic turn this morning, as crude and products have fallen well below even

Outlook: The energy complex has taken a dramatic turn this morning, as crude and products have fallen well below even. May crude oil hit a high of $64.25 per barrel earlier in the session, but has since fallen more than $1.50 per barrel below even. Product markets are experiencing similar weakness with May RBOB down about 5 cents, and front month ULSD down about 4 cents on the day. A multitude of factors are leading to the push lower. The European Medicines Agency stated today that the Johnson & Johnson Covid-19 vaccine has possible links to rare blood clotting disorders. The agency reiterated that the benefits of the vaccine outweigh the very small risk however. Over 7 million people have received the J&J vaccine in the U.S. as of April 7, with just 8 reports of the blood clot issue. The agency reported that there have been no cases of the blood clotting disorder reported in the EU. Discussions between Iran and world powers will continue next week, according to a statement from the European Union. Indirect discussions between Iran and the U.S. have been taking place for a few weeks now. The two countries are aiming to re-establish the 2015 nuclear accord, which would remove sanctions from Iran’s energy sector under the promise the country stops its nuclear program. Weakness in equities is also likely spilling over into the energy complex. All three major equity averages are trading well below even.

According to the most recent CDC data, the U.S. is averaging around 3 million Covid-19 vaccinations each day, based on the seven-day average. More than 195 million shots have been given since President Biden’s inauguration day. The Biden administration set a goal of 200 million vaccinations by the first 100 days in office. At the current pace, the country will hit around 230 million doses by the first 100 days in office. 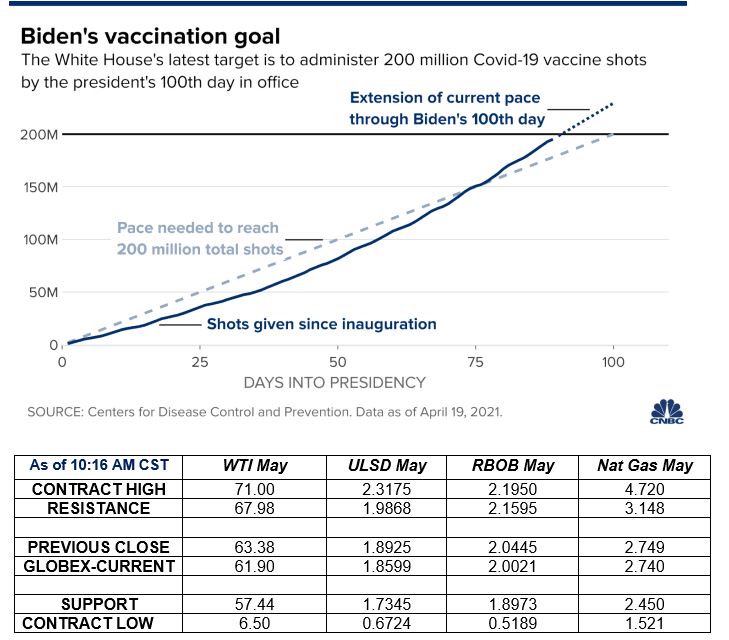