4.21.21 The energy complex has fallen slightly this morning as concerns over global demand have pressured futures lower

Outlook: The energy complex has fallen slightly this morning as concerns over global demand have pressured futures lower. Refineries in India are planning to scale back crude processing as rising Covid-19 cases are likely to cause a drop in demand. The country reported its worst daily death toll from Covid-19, and large parts of the nation are now back in lockdown to help slow the spread of the virus. India is the world’s third-largest oil consumer behind only the U.S. and China. Adding further downside pressure is the news that discussions between the U.S. and Iran are continuing to progress. The U.S. is holding indirect discussions with Iran in order to attempt to revive the 2015 nuclear accord. By all accounts, negotiations have been positive, but striking a deal is likely going to take some time. If the nuclear agreement were to be reinstated, Iran would stop its nuclear program, and U.S. sanctions would be lifted. Iran has the capacity to produce about 4 million bpd of crude oil, while they currently produce about 2.35 million bpd. Equities are bouncing back after a steep sell-off yesterday. The DJIA and the S&P 500 are trading in positive territory, while the Nasdaq Composite is just below even. 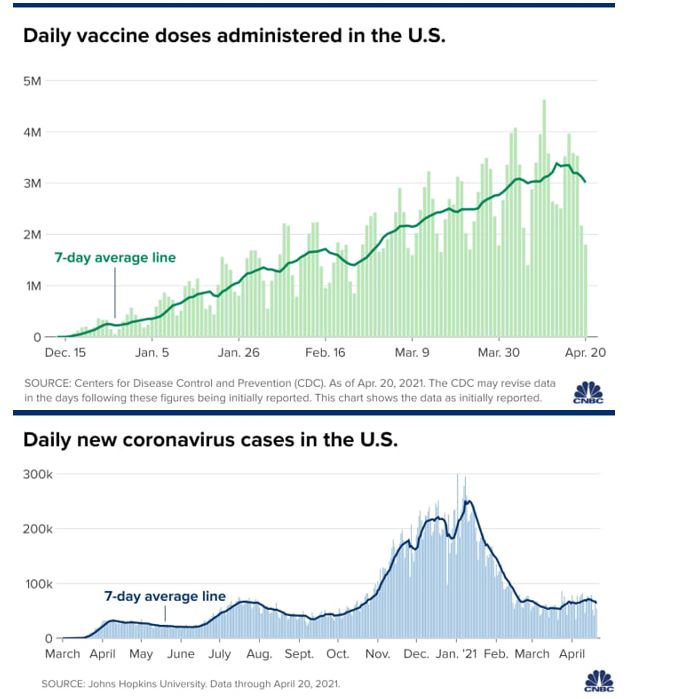