4.23.21 The energy complex has shaken off earlier weakness and has pushed higher

Outlook: The energy complex has shaken off earlier weakness and has pushed higher. Crude and products are now all trading well above even, with crude up over 1% on the day. Positive demand data in the U.S. has helped buoy futures values today. Valero’s CEO Gary Simmons stated today that gasoline and diesel demand were back to 93% and 100% of pre-pandemic levels. He also stated that the company was quite bullish on gasoline going forward. A very strong summer driving season is expected here in the U.S., as some states are reporting more than half of their citizens have received at least one dose of the Covid-19 vaccine. Improving conditions in Europe are also adding a layer of support. Officials in France stated that schools would reopen on Monday, and travel restrictions would end on May 3. Rapidly rising Covid-19 cases in India and Japan are adding a bit of downside risk however, as India reported nearly 330,000 new cases yesterday. A shortage of testing kits in the country means that number is likely just a fraction of what it truly is, according to a report from NPR. Yesterday it was reported that President Biden was likely to introduce a change to capital gains taxes. The proposal would increase capital gains tax to 39.6% for those that earn more than $1 million per year. The increase would be used to fund the American Families Plan, which is expected to cost around $1 trillion. Equities have shaken off the proposal and pushed higher this morning, as all three major averages are trading well above even.

According to the most recent CDC data, the U.S. is administering 2.9 million shots per day when based on the seven-day average. The daily average fell below 3 million for the first time in two weeks, as more states have crossed the halfway point for residents with at least one dose. The pause in use of the Johnson & Johnson vaccine is also likely pressuring the daily average lower. About 41% of the population has received at least one dose, with about 27% of the country being fully vaccinated. 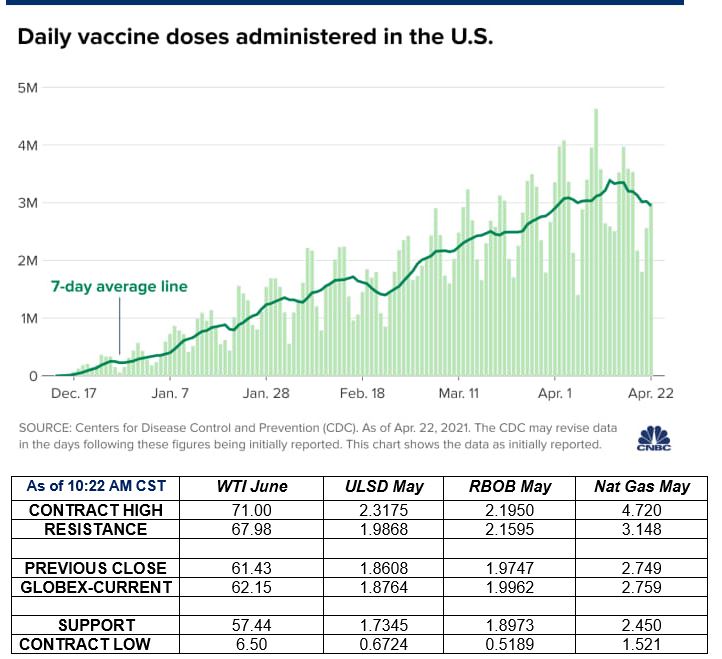