4.27.21 The energy complex has rebounded this morning, as crude and products are all trading above even

Outlook: The energy complex has rebounded this morning, as crude and products are all trading above even. The OPEC+ Joint Technical Committee has kept its growth forecast for global demand for crude oil unchanged despite the rapid expansion in Covid-19 cases in India. The technical committee has predicted that global demand will increase by nearly 6 million bpd in 2021. The OPEC+ Joint Ministerial Monitoring Committee had been scheduled to meet later this week, but a report from Reuters is suggesting that the meeting has been canceled, with the next scheduled meeting moved to early June. OPEC+ will reportedly forego the meeting and stick to the planned production increases that are set to begin in May. The group agreed on April 1 to begin to unwind the output cuts from May to July. Saudi Arabia will also unwind its 1.0 million bpd voluntary output cut. The U.S. Federal Reserve will remain on hold for the rest of the year, according to the latest CNBC Fed Survey. Respondents to the survey predict that the Fed won’t reduce its $120 billion of asset purchases until January. They also believe that the first rate hike won’t happen until December 2022. Equities have had a mixed session thus far, as all three major averages are currently trading just below even. Shares of Tesla have fallen about 4% today, despite the automaker posting a record net income of $438 million in Q1. About one-third of the S&P 500 have reported first quarter earnings. Of those that have reported, 84% have reported higher than expected earnings, according to FactSet. 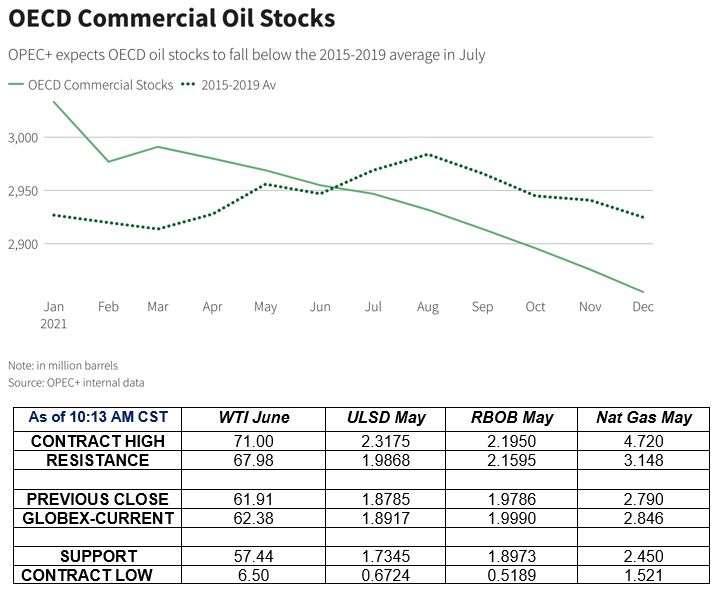