Outlook: The energy complex has pushed higher this morning as improved demand forecasts have helped buoy futures values. Despite the dramatic rise in Covid-19 cases in India, Japan, and Turkey, effects on global demand are not expected to last long-term. The OPEC+ Joint Technical Committee met earlier this week, where they stated the group's global demand forecast was unchanged. The group expects global oil demand to increase by nearly 6 million bpd this year. They also project that global inventories will reach 2.95 billion barrels by July, which would put stocks below the 2015-2019 average. Analysts at Citi have stated that the market is closer to equilibrium than OPEC+ is suggesting, as the bank expects global demand to reach a record high of 101.5 million bpd this summer. Strong economic data and a blowout earnings report from Apple are likely adding a layer of support to the energy complex as well. U.S. first quarter GDP increased at a 6.4% rate, which marks the second-fastest pace for growth since 2003. The all-time high was set in Q3 of 2020 which was fueled by reopenings following broad lockdowns throughout the country. First-time claims for unemployment also set a pandemic low but were slightly above industry expectations. Yesterday afternoon Apple reported 54% revenue growth while also announcing a $90 billion share buyback plan. Equities have responded mostly positively, as the S&P 500 has hit an intraday all-time high. All three major averages were trading above even earlier in the session, but the DJIA has since traded both sides. 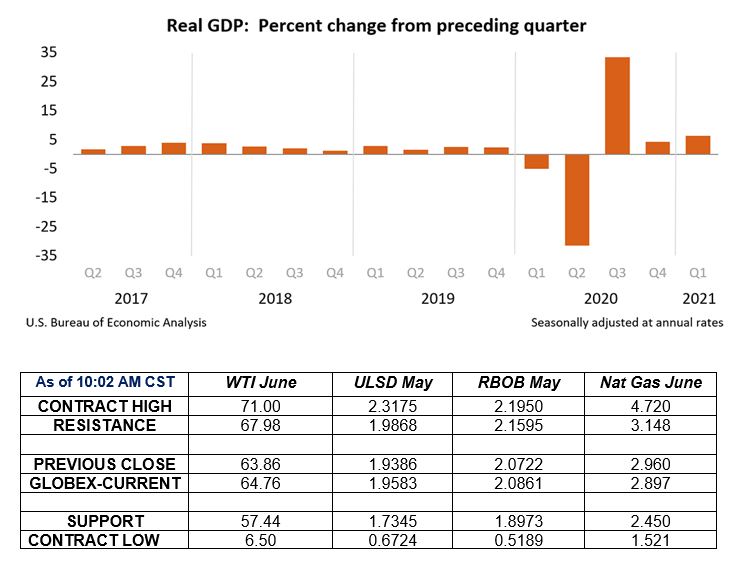