4.30.21 The energy complex has fallen sharply this morning as crude and products are all trading well below even

Outlook: The energy complex has fallen sharply this morning as crude and products are all trading well below even. The surge in cases of Covid-19 in India is pressuring the complex lower. According to energy consultant Kpler, India’s crude oil imports could fall by 1.0 million bpd, and up to 3.0 million bpd in the coming weeks to rising Covid-19 cases and suppressed demand. India reported over 386,000 new cases in the past 24 hours, with deaths caused by the virus jumping to nearly 3,500, according to health ministry data. CNBC previously reported that a lack of testing kits in the country has artificially lowered the actual number of cases in India, as health experts believe that actual case counts could be 5 to 10 times greater than the official report. Despite the steep sell-off in energy futures today, WTI is on track to gain about 10% for the month of April. Brent crude is on pace for about an 8% gain as well. Weakness in equities and a dramatically stronger dollar are also likely playing a part in the sell-off being experienced in energy. Amazon reported record high first quarter earnings, with profits more than tripling to $8.1 billion in Q1. Amazon earned $15.79 per share, while analysts on Wall Street expected the company to publish earnings of $9.54 per share. Despite the blowout report from Amazon, equities are all trading below even. The DJIA is down about 250 points, while the S&P 500 has dropped about 30 points.

The U.S. is experiencing its first true slow down in Covid-19 vaccinations, according to the most recent CDC data. The 7-day average number of inoculations has fallen to 2.6 million per day. More than half of the adult population has received at least one dose, and about 30% are fully vaccinated. Health experts have stated that to achieve herd immunity, about 80% of the population would need to be fully vaccinated. 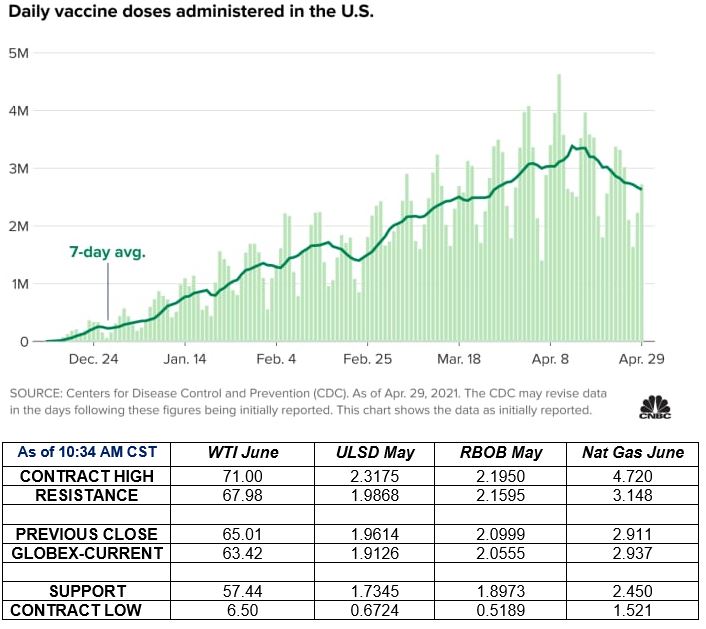