5.3.21 The energy complex has pushed higher this morning as crude and products are all trading above even

Outlook: The energy complex has pushed higher this morning as crude and products are all trading above even. Mixed and choppy trade has been experienced, however, as crude traded under $63 per barrel before moving into positive territory. A similar story can be told for front month RBOB and ULSD, as both June contracts have had wide trade ranges thus far today. Strong demand in the U.S. and China has helped buoy futures values. A lower dollar and strength in equities is likely contributing to the jump in the energy complex as well. Despite the robust demand outlook for the two largest crude oil consumers in the world, rapidly rising Covid-19 cases in India will likely crimp global demand in May. India reported more than 400,000 new cases on Saturday, with the seven-day average rising to just over 373,000 per day. India now accounts for 1 out of every 3 cases reported from a global perspective. India is the third largest crude oil consumer in the world. Analysts at Kpler have forecast that India’s crude oil imports could fall by 1.0 million bpd, with the potential for imports to dramatically fall even further, reducing by up to 3.0 million bpd in the coming weeks due to the explosion in Covid-19 cases and the potential for strict lockdowns. Equities are off to a strong start this morning as the DJIA has jumped over 300 points higher. The S&P 500 notched its third straight month of gains in April and is now up about 11% on the year. The DJIA rose around 2.7% in April, while the Nasdaq Composite gained nearly 5.5% last month.

According to the most recent CDC data, about 2 in 5 U.S. adults are now fully vaccinated. Nearly 45% of the country has received at least one dose of a Covid-19 vaccine. The U.S. is also averaging about 2.4 million inoculuations each day, based on the seven-day average. The seven-day average number of new Covid-19 cases in the U.S. fell below 50,000 for the first time since October. 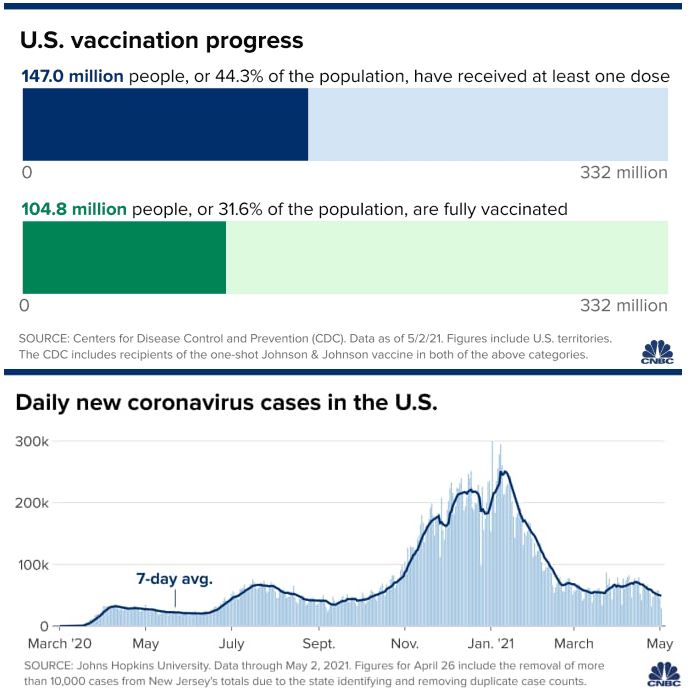