5.4.21  The energy complex has continued to push higher this morning as crude and products are all trading well above even

Outlook: The energy complex has continued to push higher this morning as crude and products are all trading well above even. Strong demand and the easing of lockdowns in the U.S. and Europe are helping buoy futures values this morning. Members of the European Union will begin to allow foreign travelers who have been vaccinated into the bloc of countries next month. Several U.S. states including New York, New Jersey, and Connecticut are aiming to ease restrictions in the coming months as well. Despite the rosier outlook, rising Covid-19 cases in India will continue to have a dampening effect on the global demand outlook. Confirmed cases in the country have risen to nearly 20 million, and have hit over 300,000 for the 12th consecutive day, according to a report from Reuters. Medical experts believe that case counts in India could be as much as 10 times higher than what is being reported however, as a shortage of testing kits is artificially lowering the confirmed number of cases. This afternoon an industry group will release its weekly inventory report. Tomorrow morning the EIA will release its Weekly Petroleum Status Report. Early industry expectations are calling for a 2.2 million barrel draw in crude oil stocks last week. Product inventories are expected to have fallen last week as well. Equities are off to a rocky start this morning, as all three major averages are trading well below even. The Nasdaq Composite has fallen by about 2.5%, the DJIA is down around 250 points, and the S&P 500 has dropped more than 50 points.

This morning the U.S. Bureau of Economic Analysis and the U.S. Department of Commerce announced that the U.S. trade deficit hit a record high in March. The imbalance in goods and services with the rest of the world increased to $74.4 billion, which is the highest level ever recorded, and represents a 57.6% increase from the same time period a year ago. The trade imbalance with China increased about 22% to $36.9 billion. 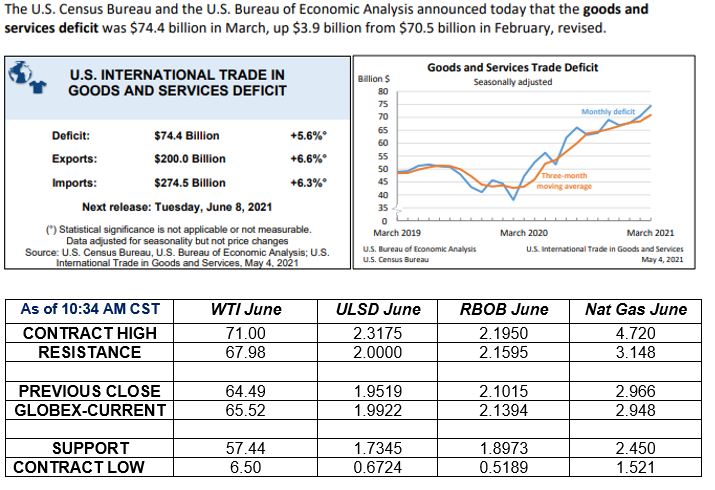