5.6.21 Energy futures have fallen this morning as mounting Covid-19 cases in India weigh on the complex

Outlook: Energy futures have fallen this morning as mounting Covid-19 cases in India weigh on the complex. Yesterday Brent crude nearly hit $70 per barrel on the July contract, but this morning prices have taken a bit of a breather as the market reassess the demand outlook. Rising Covid-19 cases in India had been put on the back burner the last few trading sessions, as traders and analysts had hoped that the country’s second wave would fizzle out. Hopes of that happening have been dashed however, as India reported another daily record for the number of confirmed cases and deaths caused by the virus. India reported 412,000 new cases, and nearly 4,000 deaths in the last 24 hours, setting new all-time highs. Health experts have stated that case counts could be as much as 10 times higher than what is being reported due to the shortage of testing kits. The official case count is likely to hit 500,000 in the coming weeks, according to a report from the Washington Post. The easing of lockdowns and falling case counts in the U.S. and parts of Europe are providing a layer of support to the complex however. Earlier this week the seven-day average number of cases in the U.S. fell below 50,000 for the first time since October and is now at about 47,000 new cases per day. If the current pace of vaccinations is upheld in the U.S., about 70% of the population will have received at least one dose of a Covid-19 vaccine by mid-June. Case counts would likely continue to contract during that time as well. Despite a better than expected weekly jobless claims report, equities have had a mixed session thus far. The Nasdaq Composite and the S&P 500 are trading well below even, while the DJIA has traded both sides. 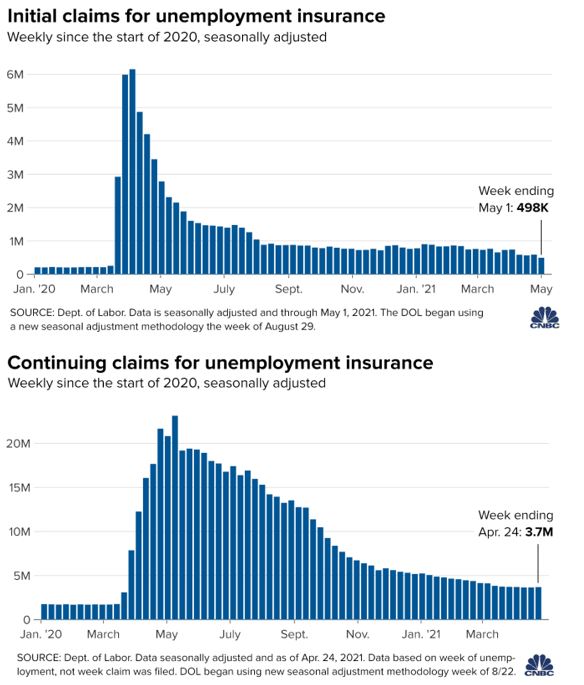