5.7.21 Energy markets have been mixed and choppy this morning as a weak jobs report and rising Covid-19 cases in India weigh on the complex

Outlook: Energy markets have been mixed and choppy this morning as a weak jobs report and rising Covid-19 cases in India weigh on the complex. A much weaker dollar has brought a level of support to the energy complex however, as the dollar has dropped to its lowest level since late February. This morning the U.S. Department of Labor reported that nonfarm payrolls in April rose far below industry expectations. The weak jobs data would suggest that an imminent rate hike from the Federal Reserve is off the table. India reported over 414,000 new confirmed cases of Covid-19, and over 3,900 deaths due to the virus in the last 24 hours. India continues to see a record high number of new cases each day. Health officials believe that the case count will hit 500,000 per day within a couple of weeks. Case counts in neighboring Nepal are also on the rise. Two weeks ago the country reported just 1,100 cases. As of yesterday, Nepal was averaging 6,700 new cases per day. India is the world’s third largest consumer of crude oil behind the U.S. and China. The mounting number of Covid-19 cases is widely anticipated to crimp global crude oil demand for the month of May. Equities have seemingly shaken off the weak jobs data, as all three major averages are trading well above even. Both the S&P 500 and the DJIA have hit intra-day all-time highs this morning. 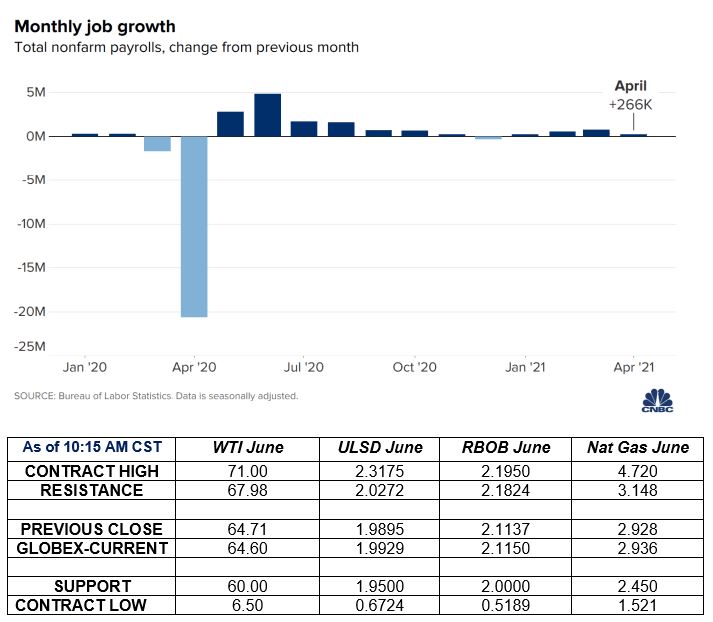