Outlook: The energy complex started the week trading slightly lower before pulling higher this morning. Losses overnight were limited by optimism regarding economic recovery which also aided in pushing prices higher this morning. Several countries including Britain, France, and Spain have now eased their Covid-19 restrictions as vaccination rates accelerate in the EU. Energy prices are finding strength from economic reopening as we now head into the summer travel season. Additionally, the U.S. continues to move towards some sense of normalcy with several larger companies including Costco and Target revising their own mask requirements. Gains the morning however are limited by remaining issues in India and other parts of Asia. Singapore and Japan have both recently taken new measures in response to higher case counts. Health officials are concerned that the highly transmissible Covid variant in India could start spreading to surrounding countries. Several Indian states reported on Sunday that they would extend their current lockdowns as case surges continue. Overall, continued economic recovery across the globe should lend strong support to energy markets, especially as we can expect higher travel demand this summer. Traders will remain watchful of developments in India and Asia, but prices should continue an upwards trend.

Saudi Arabia’s March crude exports were seen falling to a 9-month low of 5.427 million bpd compared to 5.625 million in February. 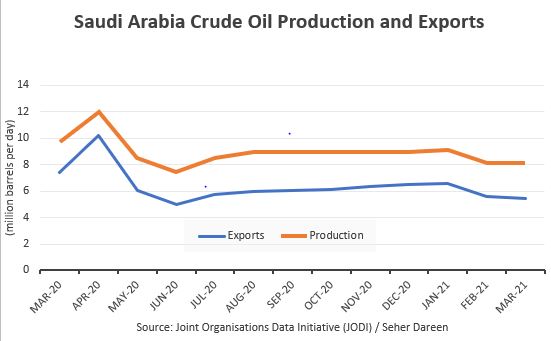