5.26.21 The energy complex experienced weaker and mixed trade during the overnight session

Outlook: The energy complex experienced weaker and mixed trade during the overnight session as boosts in Iranian production and economic optimism weigh against each other. WTI crude is seen trading lower to start the day where as RBOB futures have managed to pull into the green. Current focus for energy traders likely looks towards this morning’s Weekly Petroleum Status Report. Analysts expect that the group will post draws across the board, as seen with yesterday afternoon’s API report. Weakness in crude this morning stems from continued talks between the U.S. and Iran in regard to the nuclear deal. Currently the market expects that we will inevitably see an increase in Iranian production, but attention also turns towards next week’s OPEC+ meeting. The next meeting is scheduled for June 1, Russia stated that OPEC should consider the possibility of increased Iranian supply when making their next production decision. Losses this morning are limited by optimism for economic recovery. The U.S. reported less than 25,000 new cases in Covid-19 yesterday and over half of the population is now vaccinated. Several travel related stocks are trading higher this morning as there are strong expectations of an increase in demand now that restrictions have been largely removed. Equities also find strength from these positive headlines and the U.S. dollar sits near multi-month lows.

The EIA has lowered its forecast for India's oil demand due to the recent surge in Covid-19 cases. 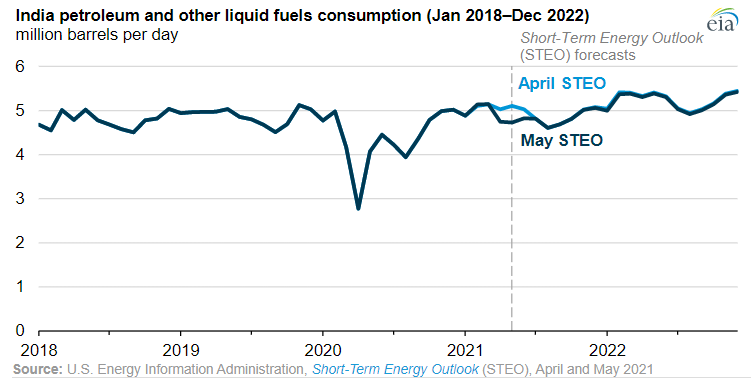