Outlook: Rumors abound that if OPEC+ sticks with their current plan of adding 400,000 bpd of production in December, that would lead to the U.S. and others releasing Strategic Petroleum Reserves. These barrels are supposed to be there for emergency use purposes, and I wouldn’t consider the current circumstance and emergency. However, it would make financial sense to sell now in a highly backwardated market and refill buy buying into the deferred. I think the repercussions could be profound if SPR barrels were to be released. Investment by the world’s Exploration and Production companies would likely shrink further, which sets up for an even bigger issue down the road. With this in mind, if in fact it plays out where SPR barrels are released, buying the dip in the deferred contracts, such as back half 2022, 2023 and 2024 would be a strategy to consider. In the meantime, we will have to see if Saudi Arabia, the UAE and others bow to the pressure and add more barrels than what is currently scheduled. We are seeing deep losses across the oil complex with WTI off $2.50, RBOB off nearly 8 cents and ULSD down nearly 6 cents.

Current crude oil inventories held in the U.S. Strategic Petroleum Reserve stands at 614 million barrels. I would also note that a release of crude from the SPR will not immediately relieve any product supply because it will need to be refined – and refinery capacity has shrunk amid the pandemic. I would suggest crack spreads have the ability to increase upon a release of SPR barrels. 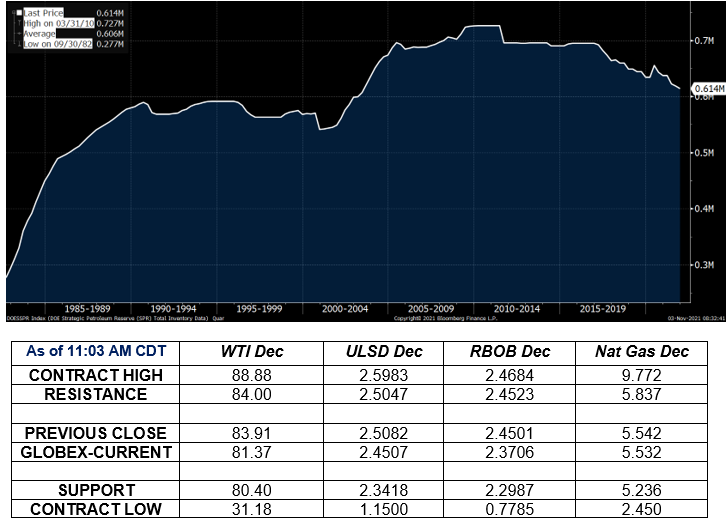