Outlook: Energies are pulling back this morning after establishing new contract highs in the overnight trade. WTI managed to hit $116.54 which bypassed 2011 highs of $115 and compares to 2008 levels. The market continues to navigate the world supply situation as the Russian invasion has slowed. The second round of talks between the two countries can be seen as optimistic, however, it was noted that no progress was made during their first meeting. The US has expressed that direct energy sanctions remain on the table if the invasion continues, which will likely result in high casualties with a mass of Russian forces on Kyiv’s doorstep. Behind the geopolitical spotlight, the fundamentals of the market are still very bullish as the EIA reported another net draw of petroleum inventories in the US. Federal Reserve Chair Jerome Powell will testify this morning as inflation remains at record levels. Powell has said they are leaning towards a quarter-point increase in interest rates.

Global Driving: The change in average miles traveled has returned to pre-covid levels as gas prices surge all over the country. With energy prices continuing to climb, there is question where demand destruction will occur. We likely won’t see a decline as we did due to covid, but prices may climb high enough to stall demand momentum. 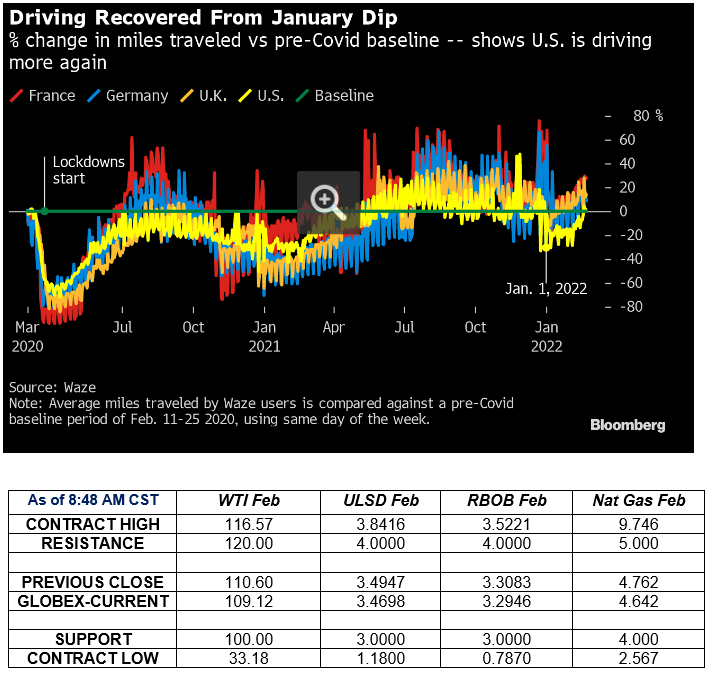