Outlook: Energies are trading lower this morning on news of continued Chinese lockdowns and demand destruction. The fighting in Ukraine has gone on despite rumors that an embargo on Russian oil by the EU could come by the end of the year. European countries are still trying to find ways to fill the void left by reduced oil imports from Russia. More Countries in the region are moving closer to independence from the Russian energy market. OPEC compliance is now above 160% due to several countries falling further behind in their production quota. OPEC+ is expected to maintain their production cuts in an effort to stabilize the marketplace from their perspective.

Prompt Diesel Spread: As the May contract expired, the squeeze pushed the spread to nearly $1.80. Today that spread is back near 30 cents. With volatile markets, this spread is something to keep an eye on. 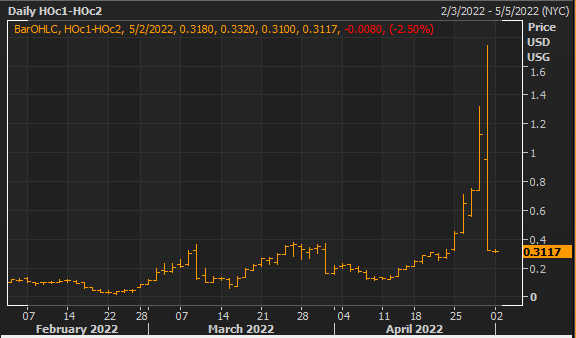