Outlook: Energies are mixed today after seeing a significant sell-off yesterday. The EU is continuing talks with Hungary in an effort to put a stamp on their proposed Russian oil and refined product embargo. The EU also announced yesterday they were dropping the proposed ban against hauling Russian products to non-EU members with many members expressing concern over the importance of shipping for their economies. Saudi Arabia and the UAE again reiterated what has been evident for a while in that spare capacity is falling, and a lack of investment in production is causing continuous disruptions. Additional supply is flowing out of the US with 1 million bpd being released from the SPR starting last week. There were concerns over the aged infrastructure being able to handle the elevated flow, but it appears to be holding up. Despite the release of the SPR, Reuters is estimating draws across the board in this week’s EIA report. Elevated exports continue to send reserve oil and products overseas and domestic inventories continue to tighten.

Nearby NG: Natural gas saw historic volatility yesterday with the market trading in a 2 dollar range between Friday and Monday. The sell-off could have been the result of increased production over the weekend, steady gas flows moving from Russia to Europe, and repositioning after a bullish run. 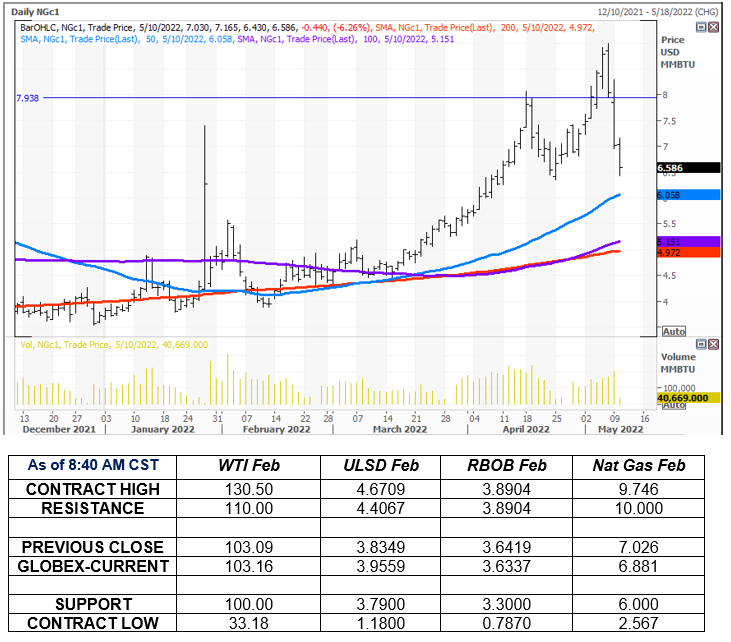