Outlook: Energies are mixed to start the morning for the second day in a row. WTI crude might be finding some resistance slightly above $115, keeping a lid on the market. Three straight days of zero covid cases should be a bullish market mover, but it’s colliding with a stall in the EU oil embargo and reports of production increases in Saudi Arabia. There was positive news in the EIA’s monthly drilling report which projected total output in the major US shale oil basins will rise by 142,000 bpd to 8.761 million bpd in June. This would be the largest increase since March of 2020. Total natural gas output is projected to increase by 0.8 Bcf/d to a record 91.8 Bcf/d. Increases in crude supply are a good sign however refining capacity may continue to be the bottleneck preventing price relief in products. Overall investment in the refining industry needs to increase for production to keep pace with growing demand.

Deferred Propane: Propane markets have separated from crude with Conway falling to 45% of WTI. Weekly dips are presenting buying opportunities with late planting across the country raising the likeliness for a larger dryer season. You can see the spike in volume for the October contract below during the last dip and this is a trend we expect to see continue. 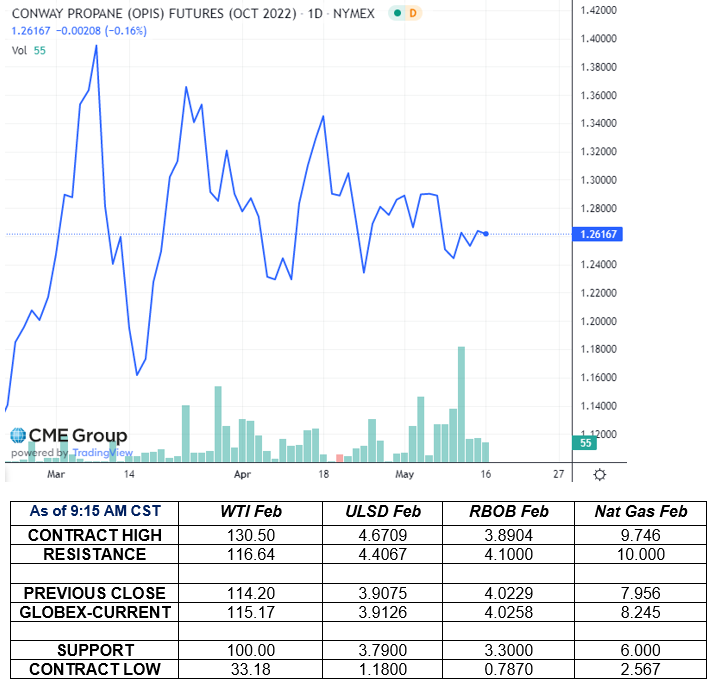