Outlook: Energies are seeing another significant selloff today, continuing from the losses seen yesterday. Diesel and gas are off 30 and 40 cents with crude off $9 over the last two sessions. Macro markets have seen large losses with the fed saying interest rates will increase until inflation shows signs of slowing. Concerns over a recession are also becoming a larger discussion every week. Bearish headlines are adding fuel to the fire this morning with reports of China buying Russian oil, increased Russian crude production, and Venezuela exporting crude to Europe. The fundamentals of the market however have not changed. Inventories all over the world continue to fall and demand continues to show signs of growth despite elevated prices. JPMorgan is predicting over $6 gas by the end of summer which could stress test demand destruction levels here in the US. The market has some room to fall this week before testing support levels, but the long-term outlook remains bullish.

OPEC Spare Capacity: OPEC’s spare capacity was about 4.7 million bpd as of April, but Bloomberg Intelligence believes the actual number may be far below that. Unsuccessful production increases have hinted that these spare levels may not be attainable. The current production agreement terms do not allow nations to compensate for others’ lack of production. 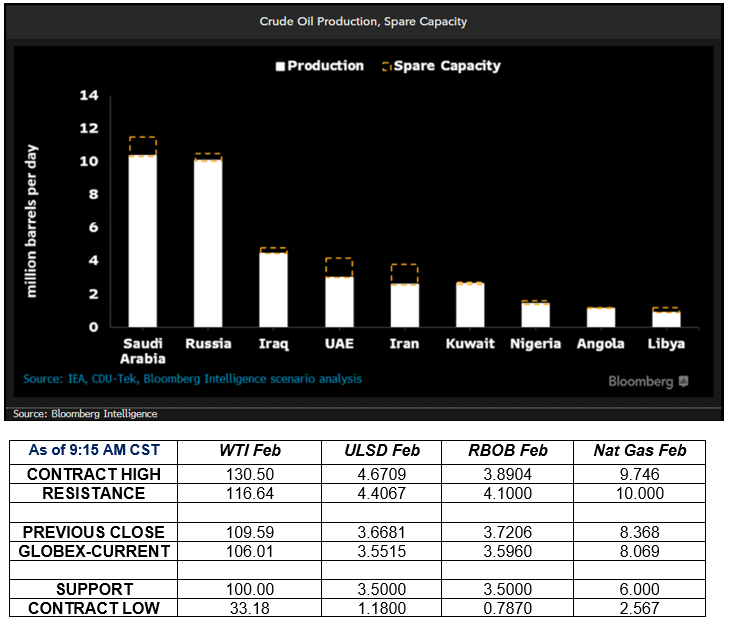