Outlook: Energies appear to be taking a breather to start the morning after what has been an extremely volatile week of trade. Crude is looking to post a modest weekly gain if it can hold above $110.98. Crude and products both tested upper resistance levels to start the week and lower support levels by the end of the week. The trading range established in crude was between $105 and $115.50 where the 50-day moving average is acting as support and March highs are acting as resistance. Conflicting market movers continue to collide on a weekly basis which continues to provide a volatile environment. Tightening global inventories point toward higher prices while covid demand destruction and concerns over macroeconomic health and recession provide large market swings. From a hedging perspective, keeping a tight DPR under these conditions is essential for reducing risk and securing margin.

RBOB-ULSD: The gas-diesel spread he received a lot of attention over the last few weeks and rightfully so. As we near expiration for both nearby contracts there is wide speculation about where this spread will go. Diesel inventories remain extremely tight and at record low levels in parts of the country while gasoline demand is set to climb with the driving season officially here next week. RBOB currently trades at a 7-cent premium to ULSD after being at a 75-cent discount earlier this month. 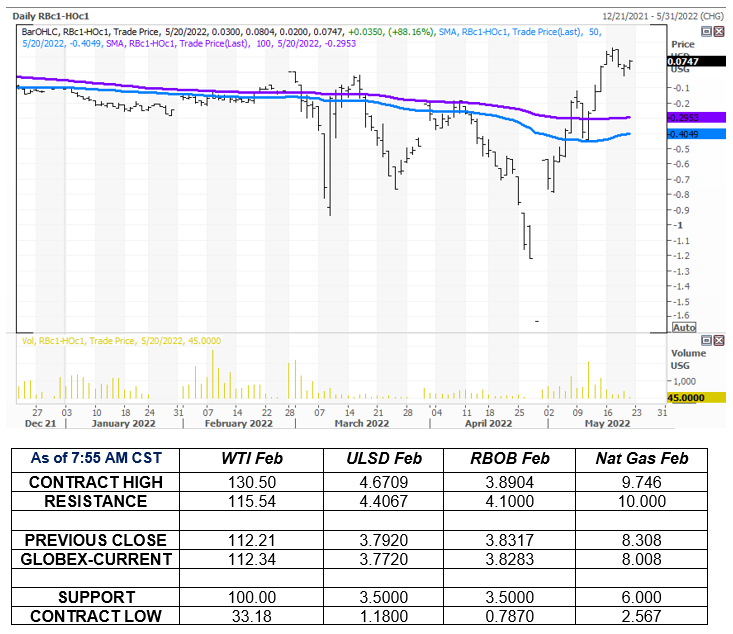