Outlook: Energy markets are continuing to show signs of light trade ahead of the holiday. Crude is starting the morning with modest gains while products remain mixed. There has been a lack of headlines this week to give the market direction and we’ve seen crude trade within its tightest range in months. The market fundamentals continue to tighten with the EIA reporting another net draw in total petroleum products. Demand is showing some sign of slowing over the past four weeks but remains in a growth pattern. Summer driving season is here with above-average travel estimated for Memorial Day. Refiners have ramped up run rates to their highest levels since 2019 but elevated diesel crack spreads have shifted the supply focus away from gasoline in recent weeks. This dynamic may continue to pressure gasoline prices consumers are paying at the pump throughout the summer. JPMorgan estimates gas prices will reach $6.20 by the end of August this year.

Crude Stocks: Cushing Oklahoma represents the largest storage hub in the country for crude oil. Inventories at Cushing fell for the third straight week to 25 million barrels. 22 million barrels is considered the operational minimum that could trigger dislocations in prices between immediate supply versus those for delivery in the future. 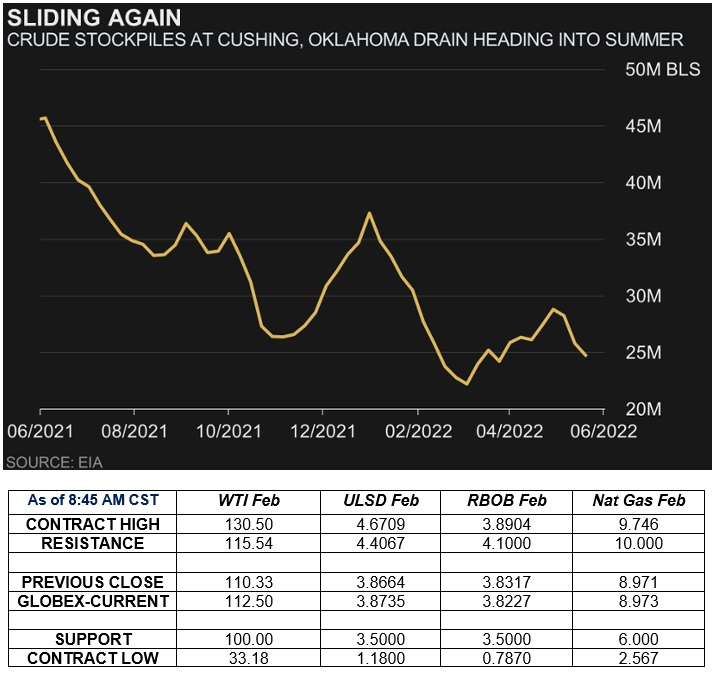