Outlook: Energies are seeing substantial gains to end the month with the exception of natural gas. Crude and refined products are being boosted by reports that the EU has finalized its long-proposed Russian oil ban. The ban will total 90% of Russian imports phasing crude out within 6 months and refined products out within 8 months. The ban is seaborne focused, however, voluntary additions to pipeline bans will yield a total of 2.2 million bpd to be replaced. Hungary had been the lone country opposing the ban over the last few weeks but today they received a concession to allow pipeline imports to continue and cast a vote of approval. Additionally, for the bull camp, China’s covid cases are at 3-month lows and Shanghai is allowing people to leave housing compounds in low-risk areas. Natural gas was excluded from the Russian oil ban as expected, although Russia continues to shutter flows to unfriendly countries. The net spec and fund long for crude and products remain very low relative to the last two years. This means there is ample room for speculative buying to support prices.

Global Demand: The IEA has cut its oil demand forecast for Q2 of 2022, bringing it below Q1 supply. Covid lockdowns have been the headline leader for demand loss, but the recent EU oil embargo will put a strain on supply recovery. ANZ analyst Soni Kumari said the latest EU embargo could keep the market undersupplied between 1.5 – 2 million bpd for the second half of the year. 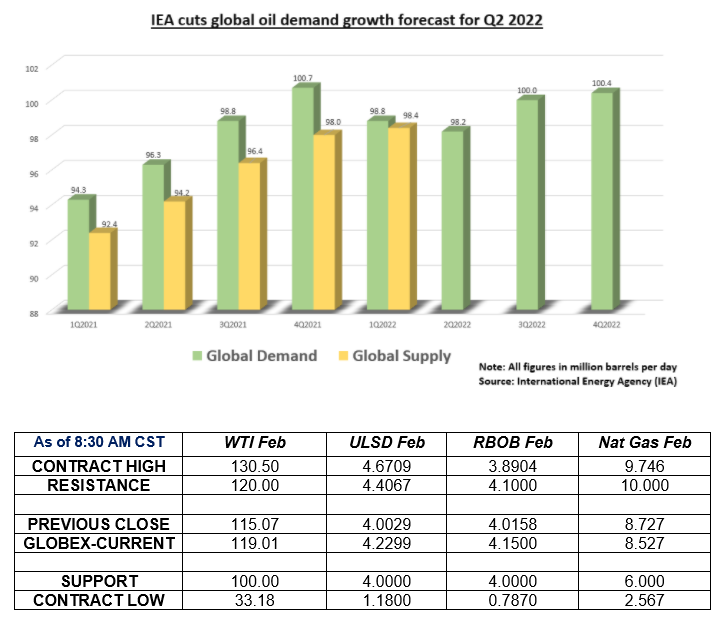