Outlook: Energies are retreating this morning with crude trading near even and products seeing marginal losses. With a lack of market-moving headlines, energy is likely finding weakness from a higher dollar index and lower equities. Rising inflation and concern over macroeconomic growth remain in the back of the minds of traders following bullish rallies. Despite some weakness in RBOB futures over the last few days, the national average retail gas price continues to climb nearing $5 milestone at $4.91. This month, product exports out of the Gulf Coast are on a record pace as domestic inventories continue to tighten. Products exiting the Gulf to Europe may continue to put additional pressure on record low east coast inventories that partially rely on the colonial pipeline to receive supply. Reuters poll suggests a 1.8 million barrel draw in crude stocks last week, while products are estimated to see small builds. The API survey will give a second opinion this afternoon ahead of the weekly EIA report tomorrow morning.

Asia Refining Profits: Asia’s oil refiners are seeing record profits making diesel as supply continues to tighten against surging global demand. Margins are at record levels dating back to 2018. Sanctions against Russia are expected to continue and could further tighten the global market. 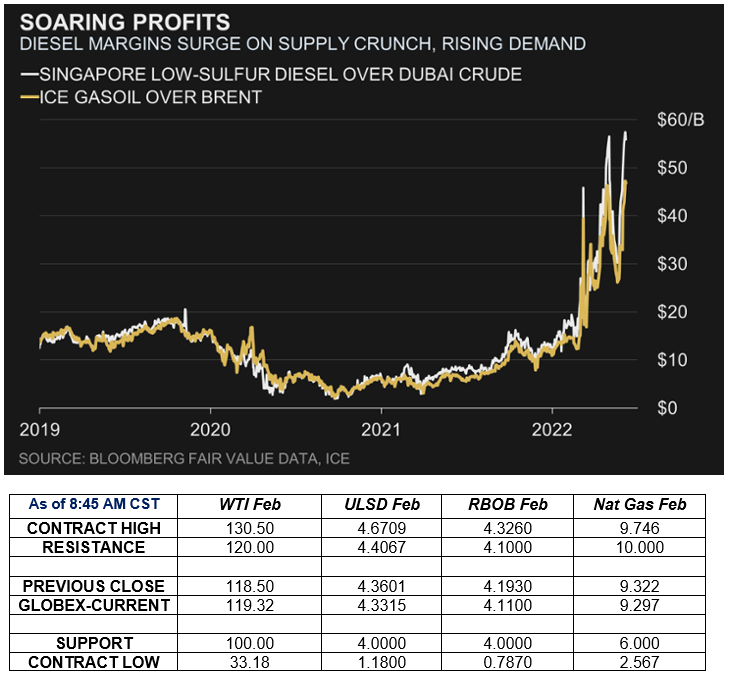