Outlook: Energies are mixed this morning with crude trading lower and products extending gains. Renewed concern over Chinese demand recovery erased crude gains early this morning as Shanghai announced a new round of mobility restrictions. This comes after lifting lockdowns earlier this month. Despite the lockdowns through May, Chinese crude imports rose to their highest levels in two years as they continue to buy discounted Russian crude. Gas and diesel are climbing today with diesel leading the complex despite its larger than expected build in inventories last week. East Coast inventories have rebounded off their lows but remain at record low levels with refining capacity near maxed out at 99%. Gas demand has remained strong through elevated prices with the national average retail price sitting at $4.97. Natural gas is down over 7% this morning after Freeport LNG said they will be shut down for 3 weeks following yesterday’s explosion. The facility accounts for 16% of US export capacity and had been exporting 2.1 Bcf/d. European natural gas is seeing an inverse reaction with TTF prices up over 7%. Europe has become more dependent on US natural gas as they move away from Russian energy.

Oil Margins: For the first time since Russia’s invasion of Ukraine, margins have begun to decline. Clearing houses had previously been boosting margins due to high volatility which decreased liquidity as traders abandoned the market. CME Group cut its effective cost of trading WTI by 4.6% this month. 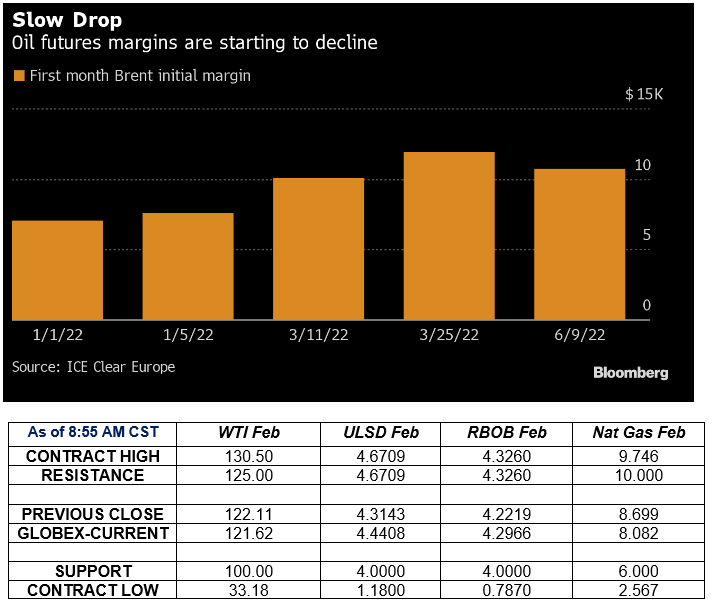