Outlook: Crude is heading for its first weekly decline since April. Gas and diesel are both trading lower with retail gas prices pulling back slightly while diesel prices set new records at the pump. The market took a macro focus this week with the Fed increasing interest rates by the largest clip since 1994 at 75 bps. Also in focus were the comments made hinting that the hike for July would be no greater than 75 bps. The US dollar index saw its largest decline since the covid drop in March of 2020. The decline allowed commodities to find strength throughout the day bringing crude off its low of $112.31. Crude traded in an $11 range this week and the volatility continues to push traders out with WTI open interest falling to its lowest levels since 2016. The key market movers have shifted with economic downturn going up against tightening petroleum inventories causing whipsaw trade at record price levels.

US Gulf Exports: Rising demand in Latin America is set to lift US Gulf Coast fuel exports to new highs this month while domestic inventories sit well below 5-year averages. Waterborne gas and diesel exports of the Gulf surged to 1.88 million bpd so far this month. Exports are up 27% from what they were in June 2019. 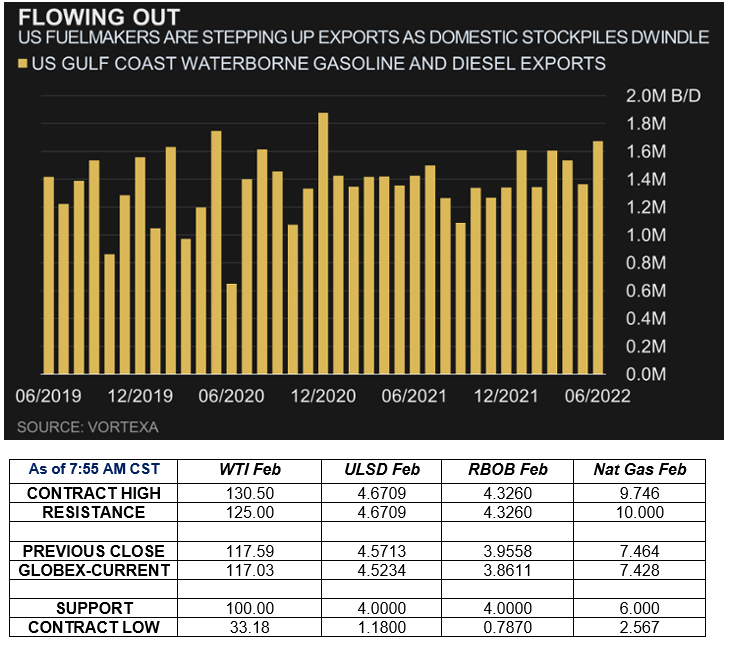