Outlook: Crude is trading lower this morning while gas and diesel are seeing marginal gains. We are seen light trade across the complex today with most markets closed in observance of the Juneteenth holiday. The July WTI contract expires tomorrow and is currently trading near the 50-day moving average of $109.50. Reports of increased imports of Russian crude in China and increases in Libyan production are helping crude hold losses this morning. Diesel continues to show resiliency to downside moves and is up nearly 10 cents today. Diesel crack spreads continue to trade near record levels which favors the production of diesel over gasoline with diesel trading at a 64-cent premium over gas. The diesel market has less elastic demand in relation to high prices, however, DEF shortages projected this summer could pull trucks off the road. Overall market fundamentals remain tight which may bring upside pressure against concerns over macroeconomic health.

Saudi Oil: The world’s largest oil exporter saw an increase in April crude production of 141,000 bpd in April. Crude exports increased by 2% to 7.382 million barrels in April. Saudi Arabia is on track to lift oil production capacity by more than 1 million bpd to 13 million bpd by the end of 2026. 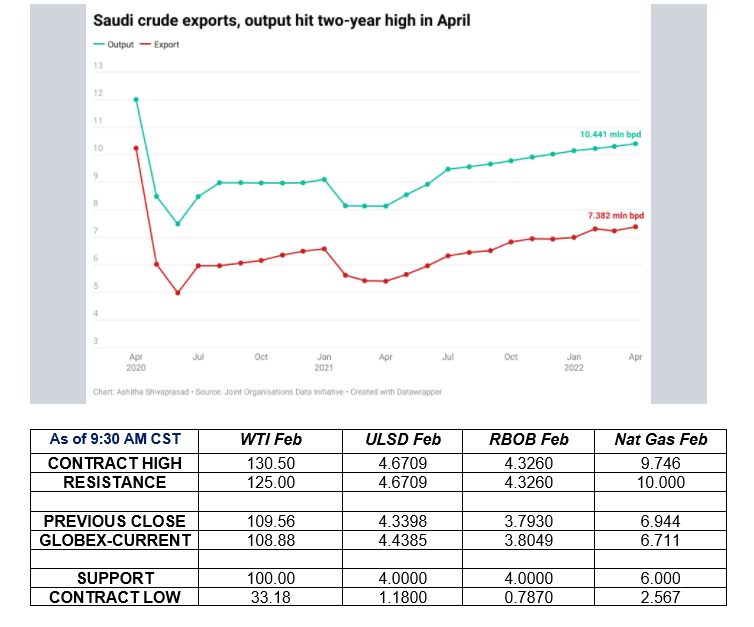