Outlook: Energies are rebounding today after a steep selloff last week and light holiday trade yesterday. Nearby crude tested the 50-day moving average but has since bounced back trading above $110. The July contract is set to expire today with around a dollar inverse to August. Products are also seeing a rebound as elevated refinery rates leave little room for supply growth in a market where inventories sit at a deficit to the 5-year averages. Global demand is expected to grow with the summer driving season in full swing and China emerging from lockdowns. Russian crude continues to find its way to the market with buyers taking advantage of the discounted pricing. The US Treasury secretary recently floated the idea of capping Russian oil prices in an effort to keep the world supply steady while still sanctioning Russia financially. It appears there are many obstacles to this proposition coming to fruition, however. Inventory reports are delayed by a day this week due to the holiday. The API will release its survey on Wednesday and the EIA will report on Thursday.

Russian Exports: Russia’s oil continues to find a home despite the sanctioning it has faced. Over half of their seaborne exports are heading to Asia while Europe’s Russian imports increased to 1.8 million bpd.  Buyers are taking advantage of the discounted product and producing fuel at record margins. 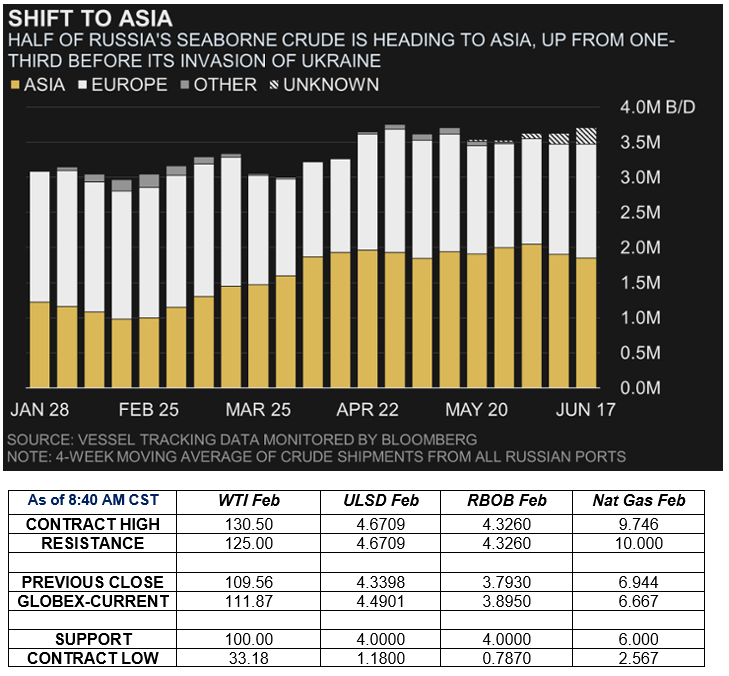