Outlook: Energies are pulling back some of yesterday’s gains with WTI briefly trading below $100. There’s a lack of significant market movers in the headlines today, however low liquidity is helping the market make big swings. A disruption along the Keystone pipeline which cut the supply of some Canadian oil to US refiners has provided a bump off the lows, but the focus today appears to be demand loss and recession. Gas prices have declined for 35 consecutive days according to AAA as products supplied in the US have seen declines in recent EIA data. Jet fuel demand has also begun to flatten out while passenger throughput remains well below 2019 levels. Biden returned from his Middle East trip without a formal commitment for increases in production and Saudi Arabia’s Foreign Minister said there’s no shortage of global oil supply but rather a shortage in refining capacity. RBC says OPEC+ will maintain their production targets despite the White House’s plea for more oil production from members of the group.

Retail Gas Price: US retail gas prices have fallen below $4.50 to $4.4950 for the first time since May. Demand loss was seen in last week’s EIA data which raises the question if demand destruction is occurring due to elevated prices. Prices have fallen more than 10% and are on a 35-day slide, the longest run of declines since April 2020. 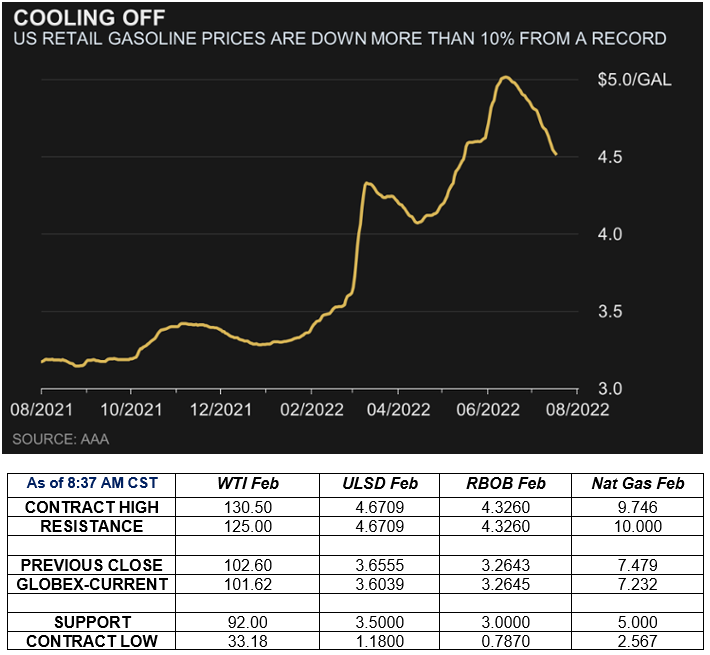