Outlook: Energy markets are mixed this morning as they attempt to digest a plethora of varying market movers. Crude and RBOB are seeing gains this morning while ULSD lags lower, reflecting the fundamentals of yesterday’s inventory report. Despite the lone build in diesel yesterday, inventories still remain 34.3 million barrels below their 5-year average. Bullish fundamentals are being offset by global macro uncertainty. China has made numerous comments about taking the necessary steps to open and boost its economy while simultaneously dealing with its largest covid outbreak since Shanghai shut down this spring. Europe is racing to import as much energy as they can before the seaborne import bans take place at the end of the year. Surging prices due to the supply squeeze continue to put pressure on their economies which are becoming increasingly susceptible to recession. Finally, the US is still reviewing the final terms of the Iran nuclear deal. Additional barrels available to the market could provide relief to the market when US SPR draws halt at the end of October.

Chinese Demand: Chinese demand remains in the spotlight as one of the world’s largest consumers. Demand has been shaky in recent months with continuous issues with covid and their zero-tolerance policies. Cases jumped to a three-month high on Wednesday, driven by an outbreak in the Hainan province. Chinese oil demand is 9.7% weaker than a year ago and global air travel is 13% below 2019 levels. 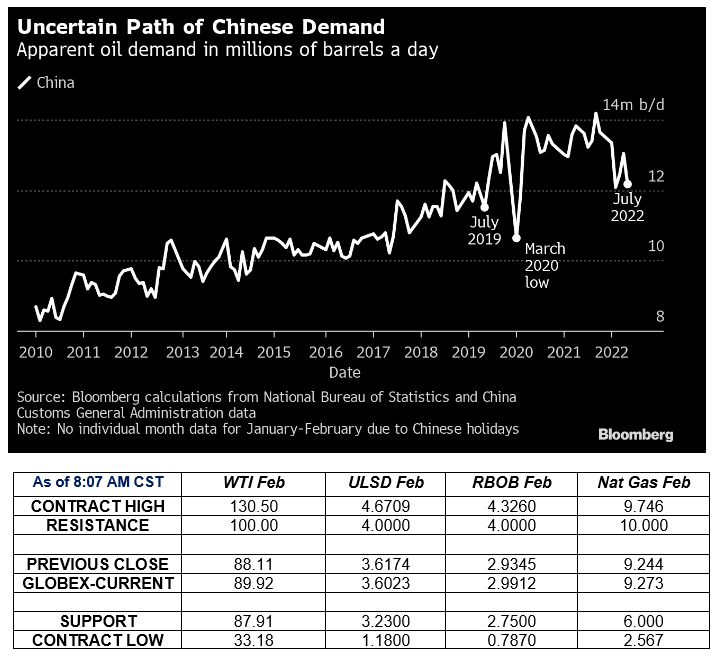