Outlook: Energies are looking for direction this morning with crude seeing strength while products lag behind lower. Saudi Arabia’s comments around OPEC+ and possible supply cuts due to the current market conditions will likely weigh on the market until their next meeting. Spare capacity and supply disruptions will continue to be a topic of discussion with the recent damage to the CPC pipeline being a prime example of the fragility of some of the current infrastructure. Macro concerns found headlines again today with Euro-area economic activity declining for the second straight month amidst record inflation. Reuters poll suggests crude inventories fell by 1.5 million barrels last week. This draw alongside a large SPR draw of over 8 million barrels could indicate exports will remain strong after posting record levels in the last EIA report. The API will report their survey at 3:30 CT.

New York Gasoline: Gasoline inventories on the east coast have continued to fall. Suppliers are willing to pay abnormally high rates for US vessels to move fuel into the region to avoid shortages. Two vessels are en route to deliver fuel from Texas and Louisiana to New York by the end of the week, according to Bloomberg vessel tracking. 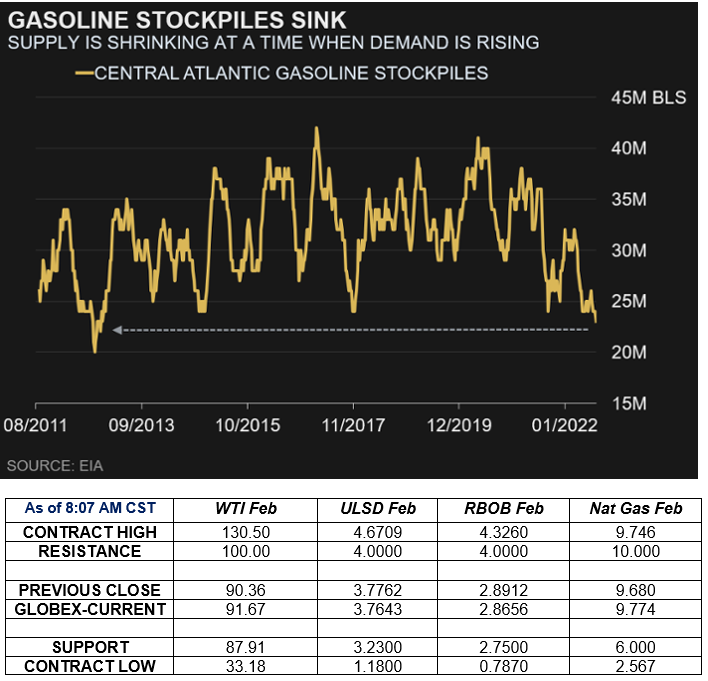