Outlook: Markets are looking for direction this morning ahead of the Fed meeting. The Jackson Hole symposium is set to take place with Jerome Powell speaking around 9:00 CT this morning. The meeting will aim to provide clarity on the direction of interest rates and the health of the economy. Fundamentals found support yesterday from a fire at the Midwest’s largest refinery. BP’s PLC shut in two crude units with no timetable for a return to processing. The Chicago basis market saw a significant uptick in both gasoline and diesel following the headline yesterday. Global headlines are mixed this morning with Chinese data reflecting roughly a 7% decline in oil demand in July while Chinese-bound cargos rose to a four-month high. Elevated natural gas prices have brought in additional speculation on the effect on the oil market. Switching away from natural gas power across Europe could increase oil demand by 650,000 bpd according to FGE. Expect volatility to continue with WTI open interest at its lowest level since January 2015.

Refinery Outages: Global refinery outages were at 858,000 bpd as of August 24th compared to 1.04 million a week earlier. Total US outages were at 136,000 bpd and total Russian outages were at 67,000 bpd. The projected decline could be interrupted in next week’s data due to the Whiting outages reported yesterday. 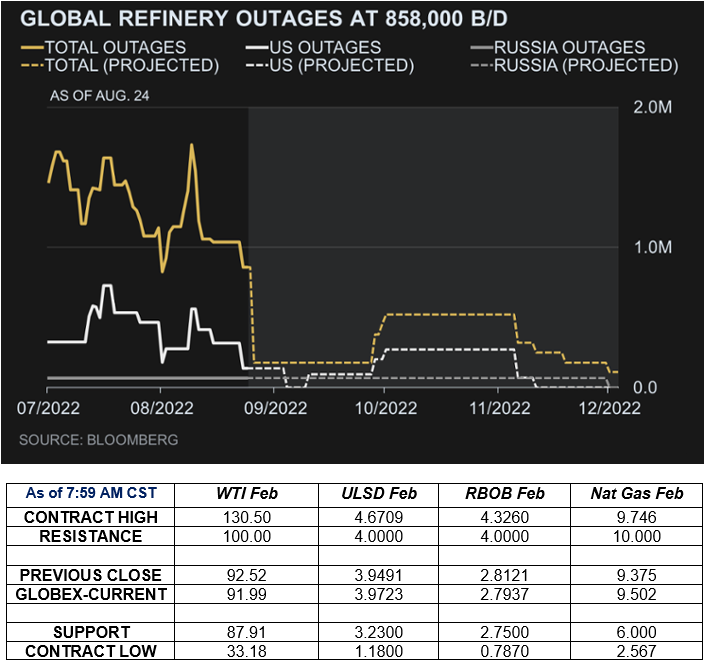