Outlook: Energies are following through with yesterday’s downturn and are continuing to move lower this morning. Demand concerns with yet another potential interest rate hike coming from the FED along with poor Chinese demand have hurt the energy complex. European energy costs as well as Natural Gas prices continue to be out of site and doing serious damage to the economy. A UK coffee shop had a nearly 10,000-pound utility bill. Overall, the market seems to be in a risk-off mode for the time being as there is a ton of uncertainty.

PADD 2 Crude Inventory: PADD 2 encompasses Cushing Oklahoma which is the delivery point for WTI Crude oil. Inventories in PADD 2 are bouncing around five-year lows while the rest of the US is in even worse shape. As we continue to drain the SPR we were hoping to see a recovery in these inventories, but that has not yet happened. If we cannot start to make a significant build in inventories before the SPR draws end the market may have toi adjust for the limited supply in the market. 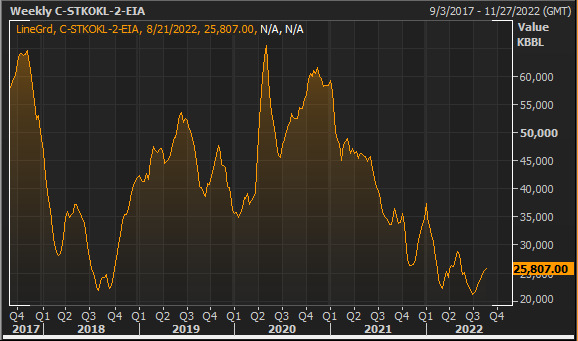