Outlook: Energies are edging higher this morning continuing on the bullish trend established to start the week. WTI futures have risen 10% over the past three sessions with supply concerns pressuring the market higher. OPEC’s supply cuts will go into effect just 1 month ahead of the EU’s Russian oil embargo which brings additional tightness to the market. The EU also approved another round of sanctions yesterday which supports a price cap on Russian oil products and Russia made an immediate comment that they would be ready to cut production if the price cap is applied. Analysts have projected Russia could cut as much as 3 million barrels of production due to the proposed price caps by the EU and G7. Goldman Sachs and JPMorgan both increased their Q4 oil price forecasts and expressed an increasing bullish sentiment towards the market following OPEC’s decision. Macro influences which have largely controlled the downtrend over the last 4 months likely won’t stay idle long. Increasing energy costs can be a significant driver of inflation, which could in turn influence the Fed to keep on an aggressive track for increasing interest rates.

US Gas Demand: US gas supplied increased by 640,000 bpd to 9.465 million bpd last week representing a 5-year seasonal high. Just two reports ago, gasoline demand was at 5-year low levels. The four-week rolling average for this time period remains 340,000 bpd below the 5-year average but above 5-year lows. 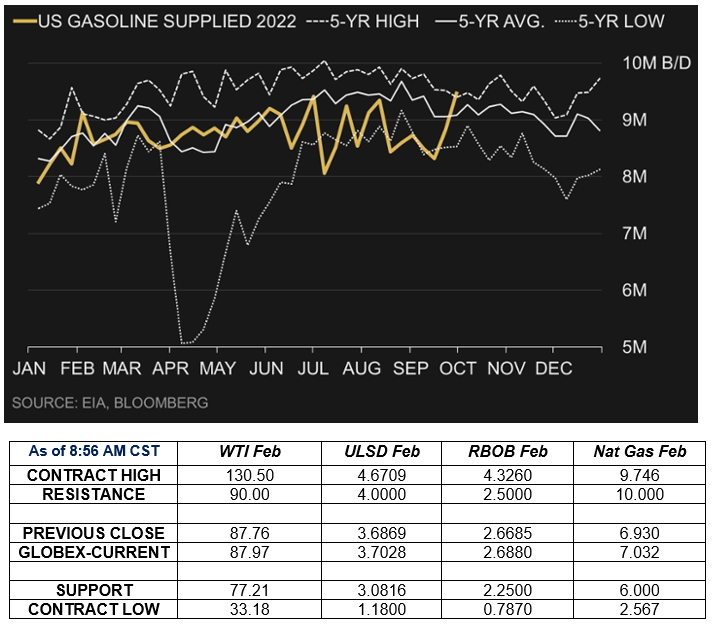