Outlook: Energies are lower this morning, primarily driven by a higher-than-expected CPI number. US CPI fell from 8.3% to 8.2% when expectations were a drop to 8.1%. With inflation showing resilience to the current rate hikes, the Fed is more likely to maintain a hawkish stance with future interest rate decisions. The IEA lowered its 2023 global demand forecast which followed the EIA lowering its US oil demand forecast a day prior. Lingering recessionary threats have analysts increasing bets for some level of demand destruction throughout 2023. The EIA will report inventories this morning which will give us a look at where current demand sits. The API survey revealed a larger-than-expected build in crude and a larger-than-expected draw in diesel which supports the diesel crack spreads surge over the last two weeks. The diesel crack spread closed at all-time highs yesterday as heating demand picks up domestically along with expectations of sustained exports to support the EU.

Russian Revenues: Russia’s oil-export revenue shrank to 15.3 billion in September and its lowest level posted this year according to the IEA. September revenue fell 3.2 billion or 17.3% from a month earlier. Crude exports fell by 260,000 bpd month-over-month, contributing to the revenue loss along with falling prices. 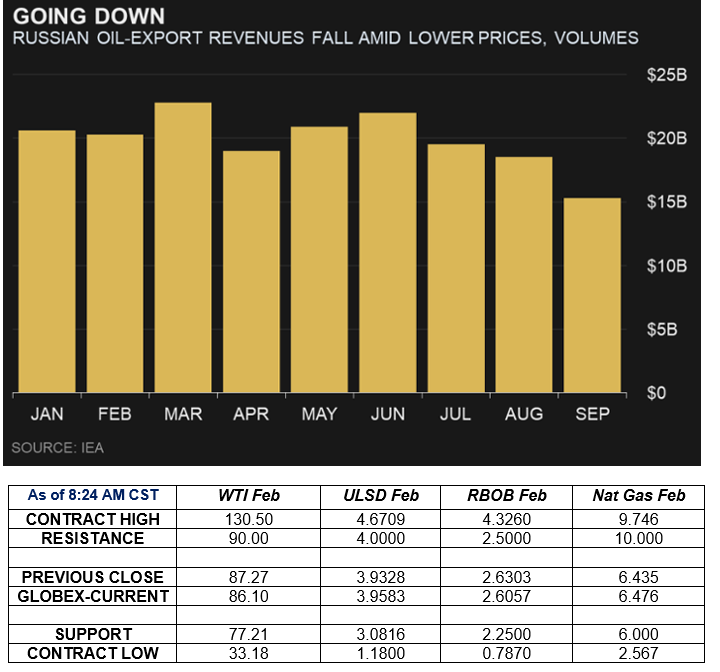