Outlook: Energy markets are mixed today with a lack of new market drivers in the headlines. There was anticipation for Chinese economic data this week to monitor the effects of their covid lockdowns however, they have delayed their Q3 reporting indefinitely. The delay does leave speculation that the data may be worse than expected, but it doesn’t appear concrete enough to cause selling. China is still ramping up exports to subsidize the economy but is also increasing covid testing in major cities which could reveal new lockdown measures. The US is considering another release of 10-15 million barrels from the SPR to fight rising energy prices. The SPR fell by 3.6 million barrels last week bringing the reserve down to 405 million barrels. Reuters estimates crude stocks rose by 1.6 million barrels last week, while diesel and gasoline inventories are expected to fall over 2 million barrels each. The API will report their survey this afternoon to give further insight into what the EIA may reveal on Wednesday.

Russian Exports: Flows to China, India, and Turkey peaked in June at 2.2 million bpd, and in the four weeks to Oct 14, that figure was down by 350,000 bpd. Shipments to Turkey have risen to the highest level for the year while tankers yet to show final destinations continue to grow. Overall Russian exports rose on a four-week average to their highest level since mid-August exceeding 3 million bpd for the first time in five weeks. 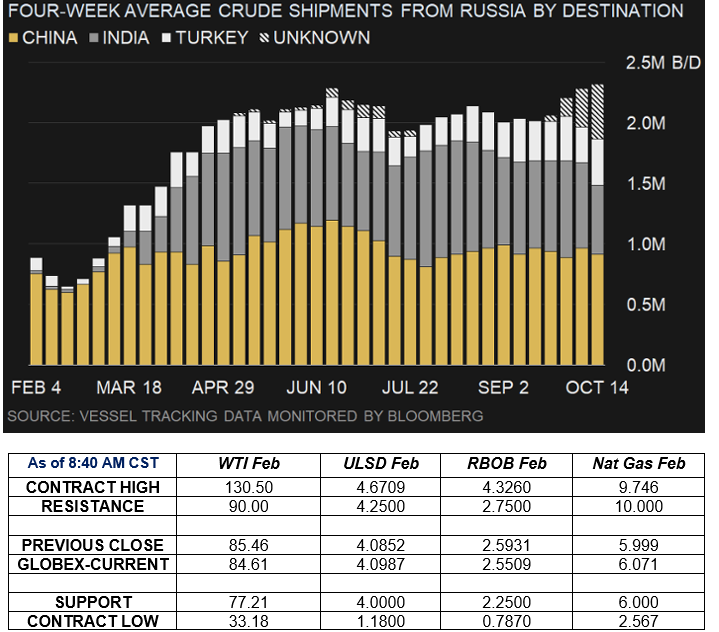