Outlook: Energies are trading higher again this morning with momentum in the market remaining consistent this week. The market saw a boost this morning from a higher-than-expected Q3 GDP figure of 2.6% vs 2.4%. Overall, the macroeconomic sentiment has turned more bullish this week which has pushed the US dollar lower and supported the complex. Yesterday’s EIA report supported the trend of the week reporting a net petroleum draw of 5 million barrels including the SPR. Petroleum exports also pushed to a record level at 11.4 million barrels which included record US crude exports at 5.1 million barrels. Padd 1b, which represents New York Harbor inventories for both gasoline and diesel, fell last week which has increased the backwardation substantially in the prompt contract for each ahead of expiration. The market will quickly put fundamentals behind it and begin looking ahead to the Fed meeting next Tuesday and Wednesday.

Russian Price Cap: The originally proposed price cap by the US and EU was expected to be between $40 and $60 to prevent Russian from gaining sizable revenue. The average delivery price for Urals crude was $63/bbl over the past three years while it has averaged $74/bbl this month. The price cap is expected to be announced before Dec 5th, when EU sanctions go into full effect. 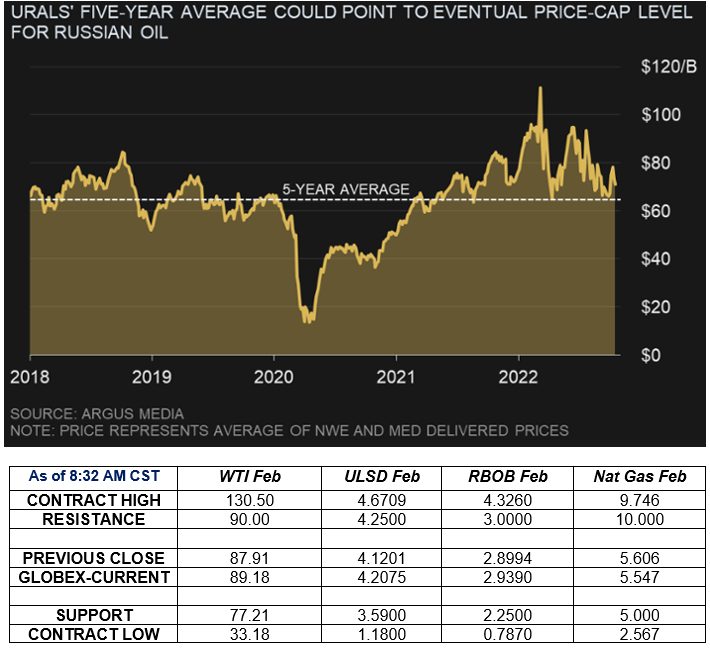